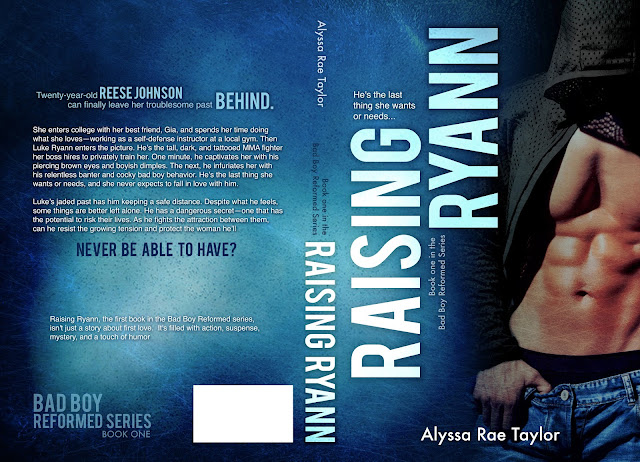 Twenty-year-old Reese Johnson can finally leave her troublesome past behind. She enters college with her best friend, Gia, and spends her time doing what she loves—working as a self-defense instructor at a local gym. Then Luke Ryann enters the picture. He’s the tall, dark, and tattooed MMA fighter her boss hires to privately train her. One minute, he captivates her with his piercing brown eyes and boyish dimples. The next, he infuriates her with his relentless banter and cocky bad boy behavior. He’s the last thing she wants or needs, and she never expects to fall in love with him.

Luke’s jaded past has him keeping a safe distance. Despite what he feels, some things are better left alone. He has a dangerous secret—one that has the potential to risk their lives. As he fights the attraction between them, can he resist the growing tension and protect the woman he’ll never be able to have?

Recommended for mature audiences due to situations of abuse, violence, strong language and sexual content.

Raising Ryann, the first book in the Bad Boy Reformed series, isn't just a story about first love. It's filled with action, suspense, mystery, and a touch of humor.

I'm a mother of three, wife of one and caregiver to two English Bulldogs. I spend most my time taking care of my children or watching Sam & Dean Winchester, fight off scary creatures on the WB.

I'm also a big reader, and tend to prefer books that tug at my emotions. I'm a sucker for any love story that includes bad boys, alpha males, fighters, rockers, and tattoos. I also enjoy an angsty read, and am not a fan of the instalove type romance.

The first time I picked up a pen and started writing, I couldn't stop, which leads to the publishing of my first novel Raising Ryann, coming out August 2013.

You can find Alyssa on her GOODREAD AUTHORLINK,

Dee’s Review
When I started this book I was scared. A MMA fighter and a virgin. I was praying that it didn’t turn out to be a cliché or a repeat of a lot of other books out right now. Please, Please be original… don’t worry- I was NOT disappointed. Honestly, there really wasn’t a lot of sex.

Which, for me, right now, is a good thing. I needed a refresher. There is drama, flirting, feistiness, banter, love, and craziness in this book. There were times that I was laughing out loud at the banter between Reese and Luke. She is just so feisty. I loved it. She would get so wound up, and he enjoyed winding her up way too much. And her blushing, how cute is that!!

Luke, I feared was going to be so laid back, and you wouldn’t be able to see his emotion, wouldn’t be able to feel that attraction from anyone but her. Boy was I wrong. Pleasantly surprised. I loved that this book sucked me in and there was no sex in it. It’s rare for a book to have me addicted solely on drama, flirting, and fun. But it totally did. When she finally realized who he was, I couldn’t believe it was one in the same person. I mean the book starts off in a pretty steep situation where Reece is saved. Then to continue on and learn that this mystery kid has always saved her and she didn’t even know his name. And now here he is, in the flesh.

She has had a pretty rough past. We know that, we start deep in that. But as they start to get close and the feelings develop, his past comes out and you hear how bad he had it. Once that starts to come out, they realize they are in too deep, but you just can’t put your finger on what he is being so sketchy about. What is he hiding?

And his dad! What a creep!! Did he really threaten her? GAH! But we do get a sneek peak at the end of what could possibly be going on. Reece grows up a lot in the book. From where she starts, to where she ends, you can see the evolution. I'm curious to see what happens with her mom. And of course, with her relationship with her dad...especially after that ending! But what is going on with Gia? What does she keep freaking disappearing when Reece needs her the most. What is going on?!!?

I have so many questions.. why why why!?!?!?!? I have to say, I’m sad that there was this HUGE freaking cliffhanger and we have to wait for book 2 but there is so much going on, it’s necessary. Do you know how hard it is for me to say that!!!  I give this book 4 hearts. Rock on sister, rock on!