This novella is the first in a series

My name is Monica. I’m a singer born and raised in Los Angeles.
I’ve stopped dating. When I cut a record, or win a Grammy, maybe then I’ll be with someone, but every man in my past has done everything he could to make me submit myself to him, and it’s gotten in the way of my career. I won’t do it again.

But there’s Jonathan. He owns the high-rise hotel where I work, and he is gorgeous and charming. I refuse to fall in love with him, even though when he asks me to submit to him, I want nothing more.

She stared up at me with my dick at her cheek, smiling. I propped my hand under my head to watch her. She licked me then slid the entire length down her throat. It felt endless. She took my breath away.
“Where did you learn to do that?” I asked.
“Los Angeles High School of Performing Arts,” she said. “They taught me how to open my throat to sing. Then Kevin Wainwright taught me how to put his dick down it.”
She was perfectly within her rights to mention another man in passing. We were in the middle of exactly nothing. Our encounter would be forgotten in a week. Yet, I didn’t care for it. Not at all.
“I’d like to thank LA Unified and Kevin Whatever for this moment.” I said.
A little laugh escaped her lips. “I like you, Jonathan.”
Lots of women had told me lots of things over the years, but rarely had they made something so simple sound so sincere.
“Feeling’s mutual Monica.” I did like her. She was fun and smart, two traits that rarely kept company with beauty.
I had her again. I licked her. I fucked her slowly, then quickly, then slowly again. She was easy to read, with her shuddering cunt and articulate speech melting into throaty gasps. I pulled her away, until she begged me for release. I complied, watching her lose herself in pleasure.
************
I woke to the sound of the water pipes humming. Even new plumbing didn’t keep a whoosh from being heard in the bedroom whenever a faucet was turned. I didn’t mind knowing what was going on in another corner of the house.
I found her at the sink, back to me, hair slung over one shoulder so I could see her neck and the little red mark where I’d bitten her. I’d wanted to make more, to stamp my feet in new snow, and feel her buckle under my teeth.
I wouldn’t normally play with pain the first time, but I had to hurt this one. I had to break the velvet texture of her pleasure, like running across the smooth sand of the beach just to put your footprints on it, or getting the first knife mark into the jar of peanut butter, breaking the flawless swirl with a slash.
And when I’d bitten her, she groaned and pushed herself toward me, a beautiful, smart, funny, masochist.
“How about another go?” I asked, my lips exploring the curve of her neck. I slid the dress off her shoulders, feeling her skin under it.
“Your phone rang,” she said.
“It’s always ringing.”
She threw her head back and her chest out, a kitten under my touch. I’d have her on the counter, maybe. Or I’d throw her on the floor. Condoms were upstairs. Fuck. I’d have to drag her up there by the hair, or carry her like a gentleman. Whichever made her squirm more.
The phone buzzed.
Jessica.
“I think I need to take this,” I said, zipping her back up while she went upstairs for her shoes. I popped the phone from the charger and went outside.
“Jon.” Her voice, so collected and in control.
“Is this about the Eclipse show?”
“I need to know if you’re coming.”
I sat on the patio couch, rubbing my eyes. I was tired again. Drained. “You have a career now. You don’t need me at every event.”
“You’re a major collector. If you don’t go, it’ll look like you only supported me because we were married.”
“No, it’ll look like I had other plans.”
“I need you to go.”
“I don’t need to look at you with Erik.” I was getting pissed thinking about it. “Do you enjoy that it upsets me? Does it get you off?”
“You know it doesn’t.”
“I’m not going. The end. Get your kicks elsewhere.”
I hung up.
That was a first. I’d never told her to fuck off before. I’d have to do it again some time. I leaned back in my chair staring out at the pool, the surface still in the late summer heat.
My phone buzzed, and I looked over at the text.

I realized I didn’t want her to acquiesce. Erik pissed me off, but her friends whispering that I liked to fuck like a violent offender were worse.
Which reminded me of the night before.
The singer. One more go.
Yes!
I went inside.
“Monica?” I cursed the size of the house. I heard the rumble of a car starting out front. By the time I got out to the porch, she’d pulled into the street.
We’d have another go when I got back. I was sure of it. 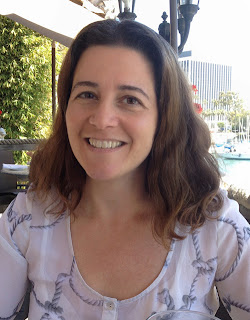 CD Reiss lives smack in the middle of Los Angeles with her children and husband. She likes to make pretty pictures and write dirty scenes. She eats dark chocolate and chili, together, sometimes with bacon, and doesn't care what you think about that.

There are a million more things she could tell you about herself besides that, but they're all too boring to mention in company.

Usually I have problems with novellas. They move too fast because they don't have the time to have as much info and depth as a full length novel or book. So I don't end up connecting as well. They don't move as fluidly to me; But not this one. Nope, Nooo. Not this one. In this novella CD does an awesome job of getting you attached to all the characters, not just to the main ones, and turning your heat on to maximum capacity then leaving you wanting more. You want to ask "why" about something with each person. You need more info. Congrats, you are now officially sucked in.  And that is how I felt with this novella. I loved it. From the first page, when she was singing I was wondering where this was gonna go. Then she meets Jonathon, in an interesting way- being a waitress and all- and promises herself nothing is going to happen. But she constantly finds herself drawn to him, and can’t keep her hands off him. Knowing he has a rough history with women, she knows she should keep her distance, but again- can’t. Not only is Jonathon amazing, and hot.. their sex is HOT! Like she can’t think straight, hot, but he also seems like his ex has a hold over him he can't yet shake. And Monica seems to me that she may be the chick to break that hold. Game on? I think so.. I can't wait to read the next installment, and I promise you I will because I want, no I need to see where this goes.  I don't only want to know what happens with Jonathon and Monica, but also with Gabby. And Darren. His ex. So many questions. Which attests to how well written this is. If I have this many questions as to what's going to happen and where were going on this trip, you know it's good. Left on the edge of my seat. Well done Cd. Well done. I give this novella 4 hearts.


a Rafflecopter giveaway
Posted by Unknown at 2:00 AM