After walking in on her cheating boyfriend, fate led Spencer Marshall to the love of her life, Brandon Montgomery. Now, she has a wedding to plan. With hope that the demons from their pasts will finally leave them alone, Brandon and Spencer look forward to growing old together.

Just as things are finally looking up, an unexpected houseguest arrives and stays much longer than expected. Will their love be strong enough to overcome the bad influences of their new roommate and the emotional aftermath of dealing with the trial? And when an unforeseen tragedy strikes, can Spencer finally have the happy ending she deserves?

After a few minutes, I realized that I was still alone in the shower. Brandon hadn’t returned from seeing who was at the door and that made me nervous. I quickly rinsed the soap from my body and started to turn off the water when the shower door opened and Brandon slipped in. His hard chiseled body stepped close to me as we both stood under the warm stream of water––something we did almost every night.
“Hey, what took you so long?” I asked, slipping my arms around his neck.
“Blake’s here.”
“Really?”
“Yep.” Brandon’s hands glided down my back to rest on my ass as he gave it a little tug to bring me closer to him.
“Did you know he was coming?”
“Nope, he said he needed to get away and used the plane ticket we gave him for Christmas.”
“Couldn’t he have asked? I mean, this is an important night,” I pouted as Brandon’s cock grew against my belly. I chuckled slightly. Here we were again, talking about his brother at the wrong time.
“Babe, you know how Blake is. He doesn’t always use his head,” he said, tilting his head down to place a soft kiss on my neck.
“I know,” I said, sighing. “Can he maybe get a hotel room for the night?” Of all the nights Blake could have come to visit us, it had to be tonight…the night when I wanted to wear nothing but my new ring and a smile.
“I guess, but we haven’t seen him in, what? Five months?”
“I know––you’re right. I just wanted to walk around naked for the night,” I said, biting my lower lip and giving him my most innocent smile, making his cock twitch in response.
“I’ll make it up to you another night––I promise,” Brandon groaned, bending down again as he pressed his lips to mine.
“But that other night won't be the night you proposed and I said ‘yes’.”
“I know, Baby…” Brandon looked down at me, searching my eyes as if he was looking for some sort of answer or something. “What if we get a hotel room in the city, you call in sick tomorrow and we order room service, eat breakfast in bed and then spend the rest of the day with Blake? He can take care of Niner tonight. It will give him time to clear his head, too, since that was the reason he jumped on a plane and flew thousands of miles unannounced.”
“Well, he did come all this way. Maybe we should spend time with him?”
“No, he will understand. I’m sure he will be here longer than one night. We will hang out with him tomorrow. Plus I want to see you wearing nothing but your new ring and a smile for the rest of the night,” he said, winking at me, reading my mind. 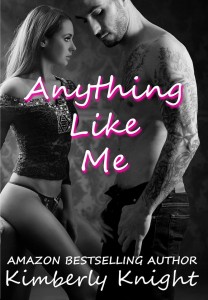 Kimberly Knight has just moved from the Bay Area in California to the mountains near a lake with her loving husband and spoiled cat, Precious. In her spare time, she enjoys watching her favorite reality TV shows, playing co-ed slow pitch softball in a few local leagues, and playing computer games like World of Warcraft with Audrey Harte and online poker. Now that she is near a lake, she plans on working on her tan and doing more outdoor stuff like...watching hot guys ski. However, the bulk of her time is dedicated to writing and reading Romance and Erotic fiction.

Quotes from the book:

“I couldn’t be happier. Brandon had come into my life at the right time––as if fate intended for it all to happen. Given these last eight months and all the life threatening situations, I wouldn’t change a thing. It’s true what people say; things happened for a reason and now I just hoped that Christy, Michael and Colin were going to get what was coming to them once their trial started so they would be out of our lives forever.- Spencer

“How many times do I have to tell you that you aren’t like all the other girls I’ve dated? You’re the one. My soulmate. My better half. Whatever you want to call it. We are getting married and we are going to be together until one of us is no longer breathing. I never felt that with any other girl before. So stop doubting anything that is in your head.”- Brandon

Okay, so normally I love a good love story. And Spencer and Brandon have that. In the first two books of the series, they have trial and tribulations, there is drama and angst. I didn’t really feel that with this one. It was really lovey dovey to me. It was all rainbows and unicorns.

Don’t get me wrong, that’s all good.. but I needed something more. Something to hold on to. Something to drop my jaw and say WOW.I don’t know that I had that here. I’m not say this was a bad book, don’t take this the wrong way. I just want to start this review off with what bothered me. I kept reading, waiting for the ball to drop.. and at one point it did. I can honestly say what did happen, had me stunned.. much like it did Spencer. I couldn’t believe it was happening. There's no way Brandon would.. nope.. he's like the perfect guy. But no worries- it was all cleared up soon. Then we have some heartbreak that follows- which did make me quite sad. But why- why did he have to die? Sigh… Hot men should never die.. just sayin.

Throughout the book, Brandon and Spencer have a great relationship. It’s not tested too badly. But I can say there is a lot more I would have loved to read about. I would have loved to read more about Mrs Robinson and her gym membership. That would have been awesome. All in all I think this was a good book. Kimberly did a good job of tying up the lose ends and giving us a pretty little ending with a pretty bow on top.

Everything is as it should be. All is right in the world of Brandon and Spencer. I give this book 3.5 hearts.

Anything Like Me can be bought on Amazon for kindle, Amazon - paperback, B&N