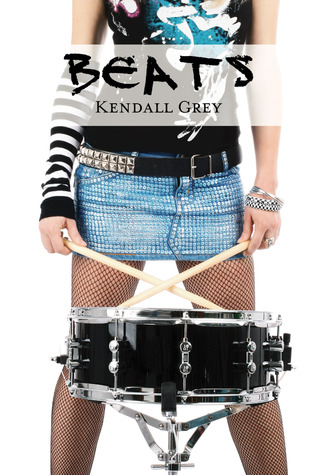 For months, shy drummer Jinx Hardwick has been silently crushing on her tall, dark, and scary bandmate, Toombs Badcock. Drawn to his frightening ink and scars, she yearns to uncover the shadowy secrets lurking behind his silver eyes, but Jinx is too intimidated to even look at him, let alone talk to him. When she stumbles upon Toombs and their manipulative lead guitarist Rax in a compromising position, Jinx realizes her chances of winning Toombs’s heart aren’t just a long shot—they’re nonexistent. To make matters worse, Jinx’s family needs her at home. She’s about to back away from it all—Toombs, the band, her dreams of fame and fortune—when Rax makes her an offer she can’t refuse: a no-holds-barred night alone with Toombs. There’s one small catch. She has to go through Rax to get it.

You have no idea how excited I was for this book. How excited I still am!! I am such a Kendall Grey fangirl!!

Holy Crap on a cracker. Just when I thought that the writing of Kendall Grey could not get any better, she goes and hits me with the awesomeness of BEATS. Good freaking god!

So we all know the story of Letty and Shades.. well, if you don't, you need to read STRINGS and get on that shit like right now. Anyway,  the band is called Killer Buzz Float and they are on tour, making awesomeass music and sharing that with their fans. Toombs and Rax share the groupies...All the while poor Jinxie has the hots for Toombs. Man, that has to chap your ass to watch that all the time.   But you'd never know..quiet old shy Jinxy. She just sucks it up and charges on. And beats on her drums night after night..beating the shit outta those drums. Stress relief in a way..Soothing. 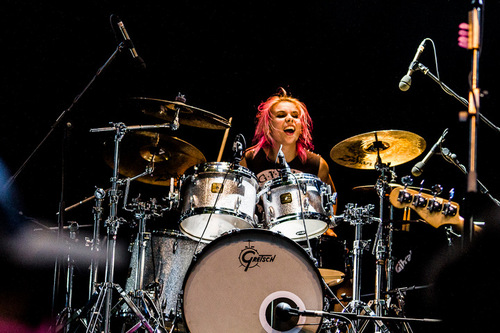 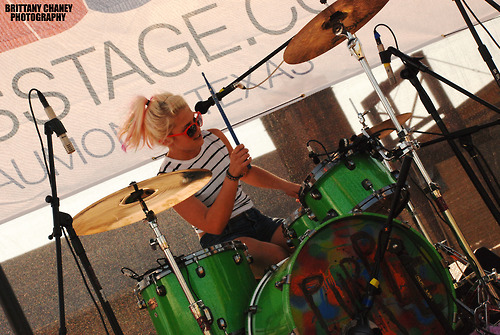 Well, not now. Now Letty is giving her a 12 step program to nail her man. This should work right? I mean after all, she did nail Shades. Yup, it's gonna work. . . right??!?!?! Then one night after a show, Jinx gets a bit of a surprise when she walks in one night with Toombs and Rax with a groupie. To her surprise, she is turned on. Who wouldn't be with those two sex gods? This causes Rax to put an offer on the table... a night.. with .. both.. of... them.. so she can have a night with Toombs. Can she say yes? Can she put up with that a-hole Rax for a night to finally get a night with the man she loves? You bet your fine ass she does! This, my friends is where it gets very.. interesting. These two men are very very very skilled. Jinx was all...

ANYWAY...these two sure knows how to handle a woman and that can be kind of intimidating for someone who isn't a slut. That must have been a first for Rax. I think maybe that's why he wants her so badly. I wanted to hate him. But damn if you can't. Sometimes you actually see a glimpse of a good guy. So Jinx has to deal Rax to get to Toombs. Not really a bad deal if you know what I'm saying. They have their one night of toe curling, sheet burning, show stopping, going to ruin for you the rest of your life, sex. And this is the point where I may have started sweating while reading. OKAY.. I admit it. I wasn't sweating.. I WAS HUMPING THE DANG PILLOW!!! OH DEAR LORD TAKE ME NOW.. I AM IN BOOK HEAVEN.. Let me just tell you, Toombs has some hidden surprises of his own. I think I just slid off my chair reading this.

CHECK PLEASE! ..actually.. I was like.. GOOGLE PLEASE! I need to see this for myself! *head meet desk* Thank you Kendall for adding this to the things I  must try once in life list. kidding... not kidding..

Did I reveal too much there? Oopps.. mooooving on. This should be it right? One night was all they agreed to. Of course not. Jinx then gets some news about her family that puts her in a position requiring help, and Rax is all too ready to exploit that to get what he wants. The question is, can Tooms step up to Rax and claim what he wants? Jinx has cut herself open and put it all on the line with Toombs.. can he do the same? Good god. This wasn't just a book about hot ass sex. There is so much more going on. Jinx has to find herself, find a way to start writing BEATS, and fight for what she wants. But she has a creative block. Her feelings back jammed her. Her sticks always calm her, but she just can't get it together..not yet.

Toombs offers to help and who knew drums and sticks could be so ... useful. But Beats is more than just sex. Its friendship, and love, and finding yourself, and fighting for what you want. I swear to God reading this I wanted to cuddle Jinx in the beginning, it was like she needed a huge. Cute little Jinxie. Then you find out she isn't so innocent. I was like WHAT!! That is bad ass Jinx, go on with your bad self!

Something broke along the way, and all the sudden she has balls! HOLY SHIT JINX HAS  A BACKBONE! I love it! I thought I loved Strings, well I did, I do... but Beats.. I love it equally as much, but it's even better to me. It's not even just awesome. That is hell yeah wrapped in a rock fucking on and sealed with a kick ass base line that makes your body vibrate with each page. Rock the Fuck on Kendall. Rock the Fuck on.

God this was good. I don't care what you have on your TBR, this book needs to be added. Like right freaking now! If you don't like this, I'm afraid you might just be a zombie. I need a cold shower right now. Screw a cold shower, give me a bucket of ice to thrown down my pants. That is how hot and awesome this was! Once I pick my tongue up off the floor of course, I may even be able to talk. Good god i give this 5 body shaking, pull my hair, make it so i don't forget it, i need a drummer, where are my toys, hearts.

About Kendall
Kendall Grey is the self-appointed past, present, and future president of the Authors Behaving Badly Club. A whale warrior and indie freedom fighter, she spends summers in the corner (usually with a dunce cap on her head) and winters hunched at the peak of Mt. Trouble, fiery pens of fury (complete with invisible ink) flying across the pages. She has a big set of cajones, and she's not afraid to use them. In her spare time, Kendall speaks your mind so you don't have to.

Kendall lives off a dirt road near Atlanta, Georgia but don't hold that against her.