Bound by Ivy Review by Dee 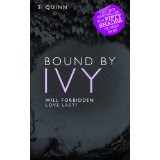 When drama student, Sophia Rose, falls for her teacher - the dark and brooding Hollywood star, Marc Blackwell, she has no idea where their forbidden love affair will end.

Sophia's father says he will only approve of the marriage if Marc and Sophia can pass the ultimate test. Three months apart.

Can Sophia and Marc's relationship stand the separation? Or will Marc's jealousy and Sophia's friendship with co-star, Leo Falkirik, drive them apart?

Dee’s Review
I was worried how this book was going to end. Hell, I was worried how this was gonna start. Especially after reading the synopsis. I shouldn't have been worried. SK handles the story line with such grace and amazingness, just like before. She always handles Mark Blackwell so well. I think her and Sophia are the only few who can.. well and me of course!

At the end of book 2 Mark is asking her a very important question. And we're left hanging. Literally, holding our breath waiting for her answer. CLIFFHANGER! But have no worries!! This book picks up right where the previous one left off... In more ways than one. I don't know what it is about Mark Blackwell that has me dying to know what he is going to do next…what is he going to do with her.. how is she going to handle him.. and I have to know now! Like, I can not wait! I will admit, I was SHOCKED at what her dad suggested.

Evenmore so that Denice agreed! As did Mark!!

JAW… DROPPED… Could not believe Mark was saying this was a good idea. HELLO!! I am definitely with Sophia on this.. NO WAY BUDDY!  But I also couldn't believe Genoveva. Wench! Slut! Someone needs to seriously slap that bitch…I VOLUNTEER!

Okay, I feel better. .. Anyway. . I was so surprised Mark agreed to 3 Months but agreed begrudgingly.  He may have acted like he wanted it for her, but he didn't. You can't fight who you belong to, even if the nut jobs are fighting to get to you. I love that even though she can't see him, he's still they when she needs him.  He’s still watching out for her. Though so was her..um… friend/co-star Leo. BUT hello!! Mark's still there when she NEEDS him, hint hint. Hot hot. ;0)  and the drama. The costar, the dad, PAIN, the psycho student. There was just so much going on, but you aren’t overwhelmed with it. SK does such an awesome job to have a lot going on, on top of the love story but doesn’t make you feel like your brain can’t keep up.. I ended the book thinking, why is this over? Just keep going..PLEASE!

Just everything about it was great. There was no rush to the development of their relationship and I loved her/it. I give this book 4 hearts.

You should really pick this up.. Be sure to read Books 1 and 2, or this one won’t make any sense.

Bound by Ivy can be purchased HERE on Amazon

Here are the links for the other books in the series:

Book two -  Where the Ivy Grows Amazon link
Posted by Unknown at 8:42 PM