Feel the Rush
by Kelsie Leverich

Synopsis:
The New York Times bestselling author of The Valentine’s Arrangement continues her sizzling series with a new novel of a plan that goes awry—in the arms of a soldier…

Picking the wrong men is a talent Meagan Mitchell has perfected. She’s sweet, confident, beautiful—and single. With her thirtieth birthday sneaking up on her, she needs a new plan. No more Mr. Wrongs or Mr. Bads, it’s time to find Mr. Safe…

Army Captain, Reed Porter, lives for the thrill—he’s an Airborne Jumpmaster with a rush addiction. He’s sexy and playful, and he quickly tempts Meagan with his rich Southern drawl and sinful looks. But slowing down and settling down are not in his agenda, making him exactly the type of man Meagan wants to avoid…

As their undeniable attraction heats up, Meagan has to decide if she’s willing to risk everything on a chance at love with a reckless charmer. Is she brave enough to bet her future—and her heart—on Mr. Thrill? Or will Reed finally learn that the feeling of a safe landing is just as addicting as the rush of the fall? 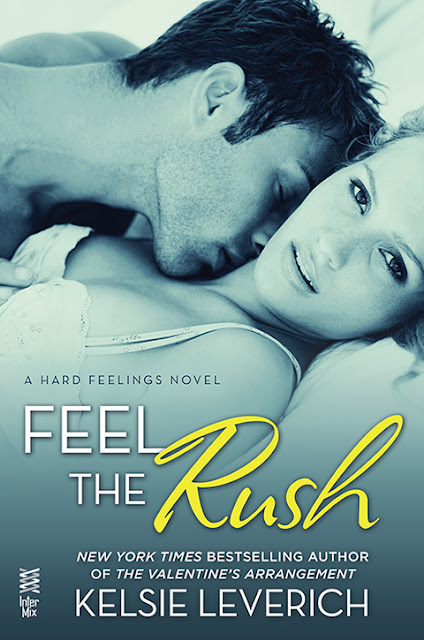 Feel The Rush on Goodreads 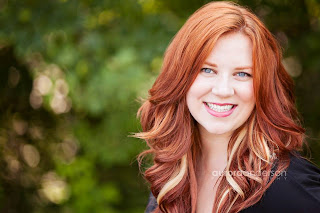 Kelsie Leverich lives in Indiana with her husband and two adorable monsters that are better known as her kids. Her life revolves around her family (to include two dogs and a cat) and most of the time, actually all of the time, it’s a crazy mess—but that’s the way she loves it! When Kelsie’s not writing, you can usually find her on the lake with friends and family or snuggling on the couch with her kids and a good book. Kelsie is not a morning person, has a soft spot for animals, loves musicals, hates seafood, and thinks laundry is the source of all evil. You can find Kelsie on Twitter and Facebook, or visit her website at www.kelsieleverich.com

So I started reading this and was addicted right away. I got sucked in. I mean who couldn't with Reed and his hotness. I immediately related to Meg, I just turned 30 as well. So knowing what she was thinking about, how you feel as if you had more planned for yourself and it hasn't happened on your timeline- I got it. I totally related. Wah..wahh..wahh...I know, we're only 30..boo hoo. But I didn't want to turn 30 either!! sigh..

So that was what made this real for me, relatable. She was a character that was so  fiesty. RAWR! I loved it. Apparently, I'm not the only one. It sucked Reed in too. How you do you stay away from the person your body and mind are screaming out for? And stay just friends. Tricky Tricky...Good luck with that one Reed!

Okay, let me start over. So Meagan has some pretty kick ass friends- Eva and Trevor, to name just a few. Trevor is just a big old bottle of Yumminess! OH!!!  And remember Kale in The Valentine's Arrangement?? Well his name gets dropped here and there too!!. She's pretty dang lucky to be surrounded by so many great friends. Anyway, So Meagen ups and moves with Eva who gets transferred to a new base. She runs into her hot neighbor chasing her cat..who she wants really bad because he super duper hot.  But then she realizes something..they have a past. But he doesn't remember. Knowing he didn't remember...who wouldn't be taken back. Who wouldn't be hurt. Who's ego wouldn't take a blow. Man, that is harsh. But he does remember, he couldn't forget her, that's what he says. So does that mean it's all going to be easy riding and they can be together? Of course not. He doesn't do relationships and she is looking for Mr. Stability. They go through a lot in the length of their friendship.. I choose to call it that. He has to face jealousy. She has to face figuring out what she wants. Oh yeah and .. they.. are .. um.. quite compatible. Did I mention that?   Of course, we knew that since they had one steamy hot romp in the bedroom years ago that neither of them forgot!

But when he rips my heart out and he walks away... THAT hurts. Just reading it made my stomach drop. I hurt for her. He was doing what was best, that's what they all say. Once he realizes his mistake he comes back, they start over and they have this perfect relationship. It's beautiful.  This give and take of sass and lust. I loved it. He is a risk taker, and much like her I was afraid the next line was going to say something happened. Then he opens up about his family and my heart literally stopped. I cried hearing his story. Legit cried. Then she fell for him, heck I think I did too. Believe me, you will too. Then it happens. The story flips upside down and tears my heart out and she runs away with it, taking it with her, only to return it and pray that Reed can put it back together. put her back together. And my god, do they... UGLY CRY TIME.

That tells you how well this is written. To take me on that ride and make me feel that, as if I was there, as if I was being told that story. That is incredible.  The end of this book has the sweetest lines, and the best vows ever. They are simple, heartfelt and REAL. That is why I loved this book. It felt so real. Not outlandish and made up. But real and relatable and a lot of the time made me smirk or smile when reading it. I gave this 4 hearts. Seriously, if you don't swoon and smile at the end.. you may be a zombie!

An Interview with Kelsie...

Where do you do your best writing?
I write in my office. I have a big cozy recliner that I curl up in and write.

Where do you do your best brain storming?
Definitely driving (without my kids) and showering. It’s the only moments that I have free time to do nothing but think.

What inspires you?
Anything can inspire me. It’s different every day. Music is a great inspiration, however I can’t write and listen to music at the same time. I just end up singing instead of working!

The Valentine’s Arrangement and Feel the Rush both included military men. Are you from a military family? Why is this a common thread between books?
Yes, my husband was in the army for over eight years and my dad was a marine. Plus military men make wonderful heroes. What better hero is there than an American GI?  And the uniforms aren’t bad either J

Where do you get your ideas for what the book boyfriends should be like? Anyone in particular?
You know, I tend to write good guys. Silly, playful, genuine, good men. I don’t draw inspiration from any one person while developing characters, but I do have to say that a lot of things my husband says winds up in my books.

What or who inspires your female characters?
I love strong women. I love to read about women who know what they want and aren’t afraid to fight for it and go for it.  I also like sexually confident women. I admire women who are happy with their physical appearance and embrace their beauty. Although physical insecurities are in every woman, I don’t particularly like to write about them. I want to read about a woman who struts her stuff and isn’t afraid to let her hair down, put on some heels, and command attention from her man.

Where did you get the lines that Reed told Meagan for their vows?
Haha, I thought of things my husband would say to me. He always holds my toes when they are cold, and he always starts my car for me during the winter (but he always complains about the hair in the shower).

Have you ever done any of the risk taking events that Reed has done, like jumping out of a plane?
No way!! I’m more of a Meagan. I love anything in the water, but heights—not so much.

What is your biggest fear?
As a mother, my biggest fear is my children needing me when I’m not there to protect them. And ironically, considering I love the water, I’m always terrified of my kids drowning. We are constantly at the lake and I am a life jacket Nazi.

Will you keep writing about those hot military men?
Eva’s story comes out in November. It’s titled PRETENDING SHE’S HIS, and is a sweet novella. Murano’s story comes outs in May, and is titled A BEAUTIFUL DISTRACTION. After that I have a few nonmilitary projects I would like to work on, but you never know, I may come back to these yummy military characters.

If you could dip into another genre what would it be?
I have a finished paranormal manuscript that I wrote about 4 years ago that I love and have tossed around the idea of publishing. But I also love erotica. I have an erotica story that’s waiting to be put on the page and I’m excited to get to it. Contemporary romance is my all-time favorite though.

Can I (Dee) be Trevor’s girlfriend?

Yay Trevor! He’s amazing, right? I think every woman needs a Trevor in her life.  You might have to fight Eva for him….yep, EVA!!


A giveaway….
a Rafflecopter giveaway
Posted by Unknown at 12:30 AM