After the Storm Blog Tour

After the storm ~ M. Stratton 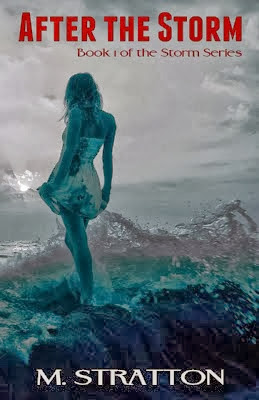 Alexia “Lexi” Hanson moved across the country to rebuild her life after the attack that almost destroyed her. She enjoys the simple things in her beach cottage. Life is finally complete.

Noah Matthews is Rock & Roll’s hottest star and on top of the world. After years without a break he finds the solitude he craves at his beach house. Enjoying his early morning coffee, Noah is surprised to see his neighbor sneak into his garden and crawl around.

They never saw that fateful morning coming. Someone was watching them. Someone who thought Lexi belonged to him and would stop at nothing to have her.

Lives are changed forever when they meet amongst the blooms in his garden. Even when things seem darkest, there is always light After the Storm.

M. Stratton is a wife and mother who grew up in a small town north of Chicago before moving to Arizona. She is currently working in accounting for a plumbing company.

M. Stratton has spent years telling herself stories to fall asleep at night before deciding it was time to get them down on paper for the world to see. She currently has eight different stories fighting to be told. Like everyone else she was afraid to put the stories down and send to publishing companies. With today’s Indie market she decided now is the time. 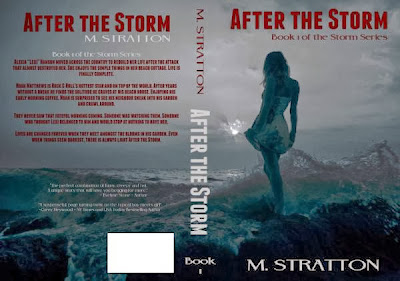 Five Fun Facts:
1. I have eight tattoos, and have plans for a sleeve.
2. I love horror movies and haunted houses.
3. I got my first grey hair when I was 13, and had so many streaks I had to start dying my hair when I was 21.
4. I love Reeces, Kit Kats and Snickers.
5. I love puns. I can drive people crazy with them.

Troublesome Trio songs:
Fever by Peggy Lee
Don't Cha by The Pussycat Dolls *
Dirrty by Christina Aguilera
I Touch Myself by the Divinyls *
Lexi songs:
Slow Ride by Bonnie Raitt *
Landslide by Fleedwood Mac *
At Last by Etta James *
Finally Woken by Jem
Save Me by K.D. Lang

Noah songs:
She Will Be Loved by Maroon 5
Sunday Morning by Maroon 5
Love Somebody by Maroon 5
The Chemicals Between Us by Bush
Everything Changes by Staind
Breakdown by Steether

Lexi and Noah songs:
Lonely In Your Nightmare by Duran Duran
A Long Walk by Jill Scott
Pale Shelter by Tears for Fears
Cross My Heart by George Strait *

Creeper songs:
Secret by Maroon 5
#1 Crush by Garbage
Never Tear Us Apart by Inxs
Everybody Hurts by R.E.M.
Drifter by Siouxsie and the Banshees
Mad World by Michael Andrews Dee's Review
Ever been searching for a book that is a thriller with a rock star love story? No? Well you should. This is a book that will keep you on your toes, guessing for what is going to happen next. When you learn of Lexi's story, of what she survived, your heart will break. Your stomach will drop to the ground. But, she is a survivor. Then she meets Noah, and your love story ensues. Not only will you fall in love with Noah, but you will also fall in love with the other characters as well. Especially the Troublesome Trio. They are the type of characters that have you sitting back and laughing at their antics, imagining that is what you are going to be like when you are older... well, me at least. This book really is a thriller wrapped in a love story. I was afraid this wasn't going to flow well. I shouldn't have worried. It will keep you sucked into the story til the very end wondering what is going to happen. I loved all the characters in the box, not just Lexi and Noah. All of the supporting characters were great. I can't say I was too happy about the prospect of there being another book, but I'm intrigued where it goes from here. Nate and Lexi's relationship seemed to be missing a little something for me. I don't know, but it just felt like something was missing. They needed a little more depth. But it really was a good read, and totally not what I was expecting. The turns the story takes from the thriller aspect kept me turning the pages wondering how it was going to unfold. I like being kept on my toes! I give it 3 hearts.

Amazon US
Amazon UK
Posted by Unknown at 2:30 AM