“The Undisciplined Bride” by Ginger Voight.  The Release Day is scheduled for Tuesday, October 1, 2013.

Throughout her 23 years, Peyton Prescott was used to running the show. That went into overdrive the minute she agreed to become a bride. Born into an affluent Southern family, she was expected to fulfill her social obligation to marry well, and found that unsuspecting groom in her pushover fiancé, Leland Goodreau. He, like the rest of her family, catered to her every whim to keep her happy, and she predicted a satisfactory, if not boring, existence as his missus. In fact, the only real human to stand up to this bridezilla from hell is Mateo Bravo, one of the chefs she considers to cater the blessed event. Sparks fly the minute they meet and out of sheer defiance, she hires Mateo and his sister Naomi for every social gathering in the remaining months until she marries.
Mateo, unlike any other man she's ever met, doesn't put up with Peyton’s behavior. With a masculine energy that she finds alluring and exciting, he turns her entitled existence upside down by showing her she's not always the boss. No one is more surprised than she is when she finds out that she kind of likes it.

Peyton decides to seduce, and then dump, the middle-class cook, just to get him out from under her skin. Instead she finds out that there are a few things in life even the great Peyton Prescott can’t plan.

She punched the button on the elevator to take her up to the roof where she hoped to get a breath of fresh air.
She stepped inside the luxurious box with the gold accents and glass wall facing out over the Houston skyline. Just before the doors closed a hand appeared and forced them back open.
Her mouth fell open when she saw Mateo enter the elevator, larger than life. He was tall and elegant in his finely tailored tuxedo, and his cologne filled her senses as he stepped closer so the doors would close.
“What are you doing here?” she stammered.
“Following you,” he answered softly as he caressed the curve of her face with the back of his hand. “We have an appointment, do we not?” She watched stupefied as he used his other hand to press every single button on the way up the high rise hotel.
“What are you doing?”
“Taking the scenic route,” he replied before he curled an arm around her waist and drew her up against his rigid body. Before she could protest, his mouth was on hers, gently probing her lips with his tongue until she wilted against him in perfect submission to his kiss. Her arms curled around his neck as she pressed against him.
His fingers wound in her hair, tugging her head back so he could explore the delicate curve of her neck with his mouth. She couldn’t suppress a groan as her fingers dug into his back. He was so exciting and so real and so raw… she couldn’t get enough. Even when the doors opened on that first floor that his fingers had accidently hit, she couldn’t tear herself away from him. Instead she wrapped one leg around his and pulled him back against the side wall.
He chuckled against the nape of her neck. “Aren’t you scared we’ll get caught?” he asked.
“I don’t get scared,” she whispered back, her mouth flushed from the power and intensity of his kiss.
“No?” he asked as he curled a hand around the back of her neck. He turned her toward the glass pane that looked out over the city. She gasped as she felt him step directly behind her. He ran his hands up her legs under her skirt until they cupped her ass. She gasped as she rested her face against the glass, staring down at the domed roof of the atrium below. It was though they were flying somewhere above the rest of the world.
He nuzzled her ear. “Tell me what you want, Peyton.”
“You,” she breathed.
He rocked his pelvis against her, pressing her into the glass. She could feel how much he wanted her, too. “Right here? Right now?”
“Anytime. Anywhere.”
“That’s a good girl,” he said before his mouth clamped on the arch of her neck. She shuddered beneath him. She thought the door opened again, but it was all a haze. She realized that she could see the reflection in the glass of the lit hallways behind them just as the doors closed.
She reached around him to grab his tight ass in both hands, pressing him closer. His arms slid down her body in between her legs, dragging the neatly trimmed fingernails up her bared thighs as he gathered her skirt into his hands. She leaned her head against his strong shoulder as she sighed when his fingers traveled in between her legs.
The door opened again to another empty hallway. Higher the elevator climbed as his fingers uncovered the hard little nub that sent electricity through her each and every nerve ending. He swirled his forefinger around this button of joy without applying direct pressure. She squirmed against him as he tortured her.
She could see his reflection in the glass. His eyes were dark as they focused on her face while he fingered her. She couldn’t stop the gasps and groans if she wanted to. She was powerless beneath his hands and he knew it.
Another floor, another open door and empty hallway. She couldn’t even begin to care about that. Mateo had her teetering on the verge of coming just with his hands. If they got caught, they got caught. But she needed him to bring her over the edge more than she needed to breathe. Both her hands slapped against the glass as they ascended. The higher they climbed, the more crazed he made her. Finally a finger slipped inside and she couldn’t help but cry out.
“Is that what you want?” he murmured against her ear as he nibbled at the lobe. “You want something inside?”
“God, yes,” she whimpered. “I want you inside me, Mateo.”
He chuckled. “Not till we’re on top of the world, princess.”
“I’m already there,” she breathed as she pressed against him.
“Not yet,” he promised. He spun her around into his strong arms and crushed his mouth onto hers. He kissed her deeper than she had ever been kissed before, as if he couldn’t get enough. He was groaning in his throat as the door finally opened to the rooftop bar. With great difficulty he pulled away and led her from the elevator.
I have also created a Blog Tour Event on Facebook – IF you want to include that in the post or just add yourself to join:  https://www.facebook.com/events/167331530125062/ 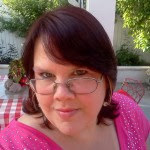 Ginger Voight is prolific author, freelance writer and optioned screenwriter. Her fiction is diverse, with novels like the edgy, coming-of-age drama DIRTY LITTLE SECRETS, and the fun family adventure for kids of all ages, COMIC SQUAD.
Having grown up reading different authors like Danielle Steel and Stephen King, Ginger has always been drawn more to story than to genre. This shows up in her various stories. Titles such as MY IMMORTAL and TASTE OF BLOOD are a delicious, heady mix of horror, suspense, and romance.
Genre romance, however, has held a special place in her heart, ever since she read her first Harlequin novel when she was only eleven. As a result, Ginger is making a name for herself writing romances of her own, starring women who look more like the average American woman rather than those traditionally represented in the size-biased American media. Her Rubenesque romances were created especially for those heroines with fuller figures, who can still get the man of their dreams if only they believe they can. Such titles include UNDER TEXAS SKIES, LOVE PLUS ONE, THE GROUPIE TRILOGY, THE FIERCE TRILOGY and PICTURE POSTCARDS.
Ginger was included in the best-selling book by Smith Magazine NOT QUITE WHAT I WAS PLANNING, featuring her six-word memoir.


a Rafflecopter giveaway
Posted by Unknown at 12:08 AM