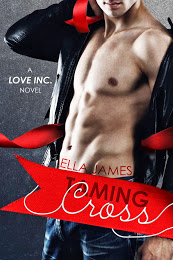 For twenty-three years, Cross Carlson was a playboy. You know the type. Tall, dark, and wealthy. Blue-eyed. Charming. He seemed to have it all so easy. But Cross was harboring a terrible secret - one that helped ruin the life of an innocent girl and almost ended his own.

Finally out of the hospital, Cross is flailing, scarred in both body and mind and stifled by the weight of the secret he still keeps. The only way to absolution lies in a Mexican convent, and going there could cost him everything.


If there's anyone who knows what it's like to screw up big time, it's Meredith Kinsey. Just a few years ago, Merri was an ordinary girl with a job at her college newspaper and white picket fence kind of dreams. Now she's holed up in a Mexican convent, hiding from a drug lord who thinks he owns her.


What happens when the only way out of hell is with the son of the man who put you there? They say love conquers all, but does it really?

Exclusive Excerpt:
I pull away from him, and I can feel myself blushing. There should be another word for this.  One that more resembles burning.
With my hands dangling at my sides where they belong, I glance up at him, feeling like the old-school, mid-20th Century definition of the histrionic woman.
I mean, it's not like we're good friends or anything. What logical reason do I have to be this worked up over Evan's quality of life?
I get the nerve to peek at him, and I confirm I'm right: He looks edgy. Uncomfortable. Like I've crossed a line.
He shifts his feet, like he wants to step away, but instead of doing that, he looks into my eyes for a few long seconds. The depth of his stare actually makes me shiver; I get the feeling he's trying to find something there. I'm doing the same thing, but whatever I see in the depths of his blue eyes feels nameless.
A second later, he thumbs a tear off my cheek, his perfect lips pressing together in a sad, resigned kind of look. “Don't cry for me, Meredith. I'm doing fine.”
I nod, feeling a glow all over my body because I'm standing so close to him.
I want to touch him. For this reason, I make myself take a small step back, tilting my head up more to meet his eyes. “I'm sorry for going all emo on you.”
The grave look on his face slips, and for a second I see something else—something vulnerable in his beautiful features. It's gone the next second, replaced by something stoic and untouchable.
I back away a little more and he lifts his hand, like he wants to touch me. Instead he just holds it there, palm out: the classic symbol meaning ‘stop’.
That's what you should do, dummy. Just stop this. You're living in a fantasy.
Evan seems to be searching for something to say. His eyes, on me, burn. I swallow and he tilts his head a little, looking unhappily perplexed. “I didn't deserve what you did for me, but I appreciate it.” He looks me over, head to toe. “You're a good person, Meredith Kinsey.”
Before I can respond, he lowers his hand and turns to go back to the table. He glances at me over his shoulder as he moves, and when he sits down, he bites into a piece of sausage. I move back behind the island and force myself to be calm, the way I would be if one of my children got hurt and I didn't want to alarm them. I force my mannerisms to remain gentle and unhurried as I eat my own breakfast, but internally, I'm going a million miles an hour.
I feel mortified. Desperate. Hungry. The feeling is familiar, and from long ago: It reminds me of the way I felt about Sam, the assistant band director. My first full-on crush.
I pour myself a glass of water and sigh, because how typical is that? Will I always be the blushing girl with the inappropriate crush?
Well, I guess I’m not blushing anymore, that’s for sure, but this guy is very much off limits.
Not because of all the many obvious things, but because of my secret. The one he doesn't know—and I won't tell him. The one that’s the likeliest of all my baggage to reach across time and distance and end me.
What I should tell him is that I'm not the kind of person he thinks. I probably never was, but I'm definitely not now.

I'm a Denver, Colorado author who writes teen and adult romance. I am happily married to a man who knows how to wield a red pen, and together we are raising a feisty two-year-old who will probably grow up believing everyone's parents go to war over the placement of a comma. My books have been listed on numerous Amazon bestseller lists, including the Amazon Top 100 and the Amazon Movers & Shakers List; two were listed among Amazon's Top 100 Young Adult Ebooks of 2012. To find out more about my projects and win prizes and swag, find me on Facebook at Facebook.com/ellajamesauthorpage. Questions or comments? Tweet me at author_ellaj or e-mail me at ella_f_james@ymail.com.

Talk about a story I didn't see coming. Holy crap on a cracker. So cross has been in a horrible horrible motorcycle accident. So bad, he's bad like three spinal surgeries and still can't use or feel his hand. That is hard for him to accept and deal with when he runs a custom motorcycle shop, let alone rides one everywhere.. needless to say it takes some major adjustments. And the worst part, his parents don't give a shit. Like they moved him to a shit facility because they don't care. And he hates his father. Like totally HATES him.
Wait. No that's not even the worst part. This accident happened because he found out the truth about his piece of crap dad. He just spends one minute with the bastard and wants to hit him. Almost has a breakdown. Hell, I'm reading this thinking..'man that guy is a total bastard' and I want to hit him.

I'm telling you this book is DRAMA TO THE MAX!!  well Cross can't live knowing the mistress was sold any longer. So he decided to take off and save her. Pretty ballsy since only one arm works and he still has pain attacks. I was seriously on the edge of my seat reading this. I was wondering once he got her would the cartel get them. Then all the sudden Cross is this bad ass hero. I was like whoa where'd that come from. Holy shnikes!! He is just kicking ass and taking names. He's getting them out of freaking Mexico!

And good for him because Meri's needs help. She can help him with his pain management, and he can help her get home. That's the plan at least.. Then she starts to tell her story. How she didn't purposely become a mistress. Hell she didn't even purposely end up in Vegas. But be that what it may, she's very mature about it all. Maybe it's her time at the church. I don't know. I know I would be insanely crazy. I am pretty sure I already am. But still... There is so much going on with them being on the run, the cartel on their tails, his attacks, where they hide... You almost miss them falling for each other. But now that they have fallen- can they overcome her truths? Her truths behind her past? Oh god I was on the edge of my pillow like yea Cross.. No Merri. .. Yes!! No!! I'm all over the place here!!! good god on a crotchrocket this was a good book. I give it 4 hearts.

Giveaway
a Rafflecopter giveaway
Posted by Unknown at 3:00 AM