Darkness of Light Review by Dee 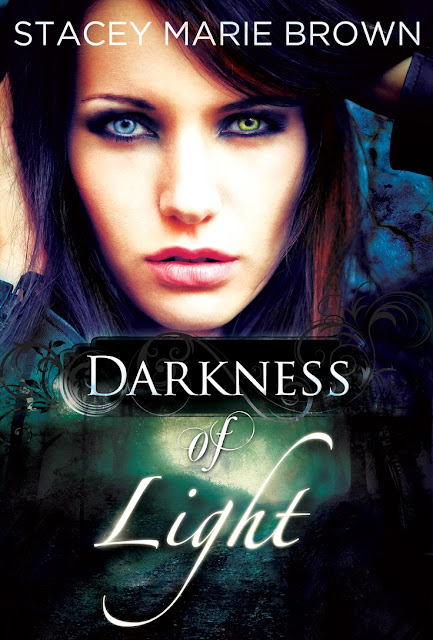 Blurb:
Darkness Of Light (Darkness Series Book 1)Freak. Witch. Crazy. Schizo.Ember Brycin has been called them all. She’s always known she’sdifferent. No one has ever called her normal, even under the bestcircumstances. Bizarre and inexplicable things continually happen toher, and having two different colored eyes, strange hair, and anunusual tattoo only contributes to the gossip about her.When the latest school explosion lands her in a facility for troubleteens, she meets Eli Dragen, who’s hot as hell and darkly mysterious.Their connection is full of passion, danger, and secrets. Secrets thatwill not only change her life, but what and who she is—leading herdown a path she never imagined possible.Between Light and Dark, Ember finds a world where truth and knowledgeare power and no one can be trusted. But her survival depends onfinding out the truth about herself. In her pursuit, she is forcedbetween love and destiny and good and evil, even when the differencesbetween them aren’t always clear. At worst, she will incite a war thatcould destroy both worlds. At best, she will not only lose her heartbut her life and everyone she loves. Once the truth is out, however,there will be no going back. And she’ll definitely wish she could.

Stacey Marie Brown works by day as an Interior/Set Designer and by night a writer of paranormal fantasy, adventure, and literary fiction. When she's not writing, she's out hiking, spending time with friends, traveling, listening to music, or designing.

You can stalk Stacey on her social medial links below

“Stop me.” As he moved in closer, I could feel the heat resonating off his body. He paused for a moment, waiting for me to act on his words. I didn’t. Grabbing the back of my head, he tugged a handful of my hair back so I had to look up at him. Breathing in shakily, conflicting emotions of hate and desire raged inside me. Fire burned in his pupils, making him look even more feral.

He suddenly pressed his body into mine, his lips coming down on mine with a savage hunger. I felt dizzy; my need for him was desperate and raw. His hand locked on the back of my head tighter as I pulled him by his belt loops closer to me. We were both fierce and demanding as we kissed. Biting. Tugging. Wanting.

Fire in the Darkness Amazon link 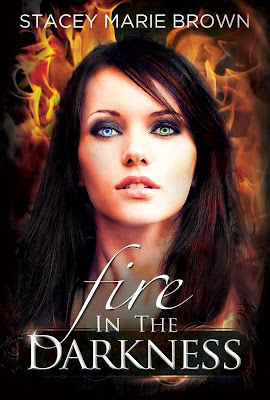 Dee's Review
Holy crap. You ever pick up a book and get so sucked in you just do not want it to end??? That's what this book was for me. I was a goner. Which is saying something because I don't get sucked into paranormals very easily. I know, I know, I've said it before. But DAMN!!! I was sucked into a book of secrets and unwanted desire and dreams of warning and promises... and also of hatred and fighting and someone just dead set on putting her behind bars. But the thing that did drive me insane, is no one will tell her who she really is. Everyone knows, but no one tells this poor girl what is going on. Torin visits her and starts to kind of explain. All the while, I'm screaming at Torin to stop speaking in riddles!!

Target meet back. But this man, Torin, is watching her and appearing in her dreams trying to help her. But help with what?? She doesn't know, I don't know either!. Then there is Eli and Sam. He seems like he hates her for no reason. But they have this undeniable attraction and desire they can not escape. Sam and Lorcan hate her and we don't know why. Well, with Sam it's obvious- Eli. Who wouldn't be jealous and catty over him? MEOW! Underneath it all Ember knows there is something going on with her, but no one is telling her. She sees things, so much she thinks she is hallucinating. Eli won't tell her what he knows, he won't tell her much of anything and its infuriating. We do know anytime her emotions get out of control shit happens. But the secrets... Everyone is keeping secrets.

She doesn't know who to trust, but she keeps trying to open up and trust Eli. He sure is hell bent on using and betraying her. I was so pissed. Like WTF Eli. Why do you insist on fighting it? Why do you insist on the secrets?? Come on!! I was getting pissed that no one would tell her. Finally she's begging them to tell her what she is.. and I'm with her. TELL ME!!! I mean.. TELL HER!!!

It was maddening that everyone wanted her in the dark. Then there was a lot of people that just wanted to attack her. Literally attack. Eli sure was there to save her a lot. But damn Eli!! Talk about bipolar. Serious head games dude. Then the tattoo. Like come on. I need explanations here. Geez Stacey way to keep a girl on the edge of her seat, craving more!! Then you thrown in that she's just a pawn. No one is who they seem. What the hell is going on.... and the lightning!! HOLY CRAP!

I need more. You want a book that is going to throw you into an alternate universe, suck you in, spit you out, beat you up, turn you on and walk away? This is that book. And damn if I don't want more. I give this book 4.5 hearts. This is a MUST READ!