Review of
Tangled by Emma Chase
and Release Day Contest 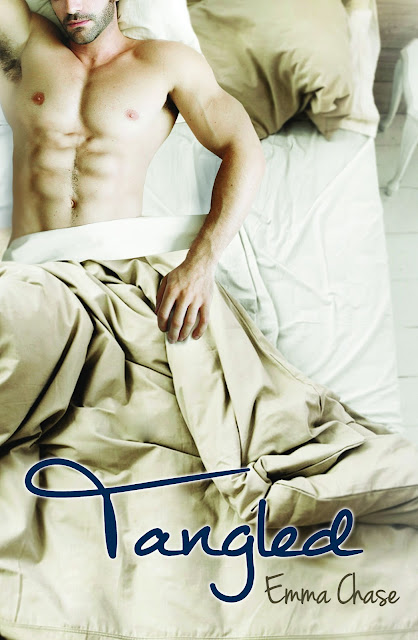 Blurb:
Drew Evans is a winner. Handsome and arrogant, he makes multimillion-dollar business deals and seduces New York’s most beautiful women with just a smile. He has loyal friends and an indulgent family. So why has he been shuttered in his apartment for seven days, miserable and depressed?

He’ll tell you he has the flu.

But we all know that’s not really true.

Katherine Brooks is brilliant, beautiful, and ambitious. She refuses to let anything—oranyone—derail her path to success. When Kate is hired as the new associate at Drew’s father’s investment banking firm, every aspect of the dashing playboy’s life is thrown into a tailspin. The professional competition she brings is unnerving, his attraction to her is distracting, and his failure to entice her into his bed is exasperating.

Then, just when Drew is on the cusp of having everything he wants, his overblown confidence threatens to ruin it all. Will he be able untangle his feelings of lust and tenderness, frustration and fulfillment? Will he rise to the most important challenge of his life?

Can Drew Evans win at love?

Tangled is not your mother’s romance novel. It is an outrageous, passionate, witty narrative about a man who knows a lot about women…just not as much as he thinks he knows. As he tells his story, Drew learns the one thing in life he never wanted is the only thing he can’t live without.
Dee’s Review
Okay let me just start by saying I love Drew! He is HILARIOUS! I LOVE that we get a story like this, from a man’s point of view. And he’s such a slut.. and honest about it! .. and did I mention hilarious!?!!? He knows he's a play boy, one wink and he gets what he wants..he's so honest about it.

I mean literally there were times where this was me. Oh my god, do men really talk like this?? Did he just.. bahahaah..

And this starts the show down. With work, and with play.It is like one of those scenarios where you fight so much, not only fighting at work, but your attraction .. then BOOOM! It erupts. Epic! And there is some cute kissing..

BUT WAIT.. she’s engaged. Problem, right? We get there, don’t worry. He tells us the WHOLE story. And it’s worth every page. Because when they finally do… ya know.. knock ‘dem boots..

YOWZA! I’m not going to give spoilers.. SPOILER FREE ZONE!! .. but I will say.. Holy Cow, do they manufacture Drews anywhere? Once he sets his mind to something he wants… ummm… yeah.. can I have one to go? This was HOT HOT HOT! At the end.. this was exactly how I felt.

I give it 4/5 hearts, sizzling, belly laughing, hearts.

ON TO THE CONTEST....
For anyone that purchases Tangled ON the release day of 5/21, they can email their Amazon, Nook, Kobo, Chapters, etc. receipt to giveaways@emmachase.net and be entered to win a $25 Amazon Gift Card, Omnific Gift Card, or B&N Gift Card! Now..go get #Tangled!