All Wrapped Up Cover Reveal

All Wrapped Up
By: Braxton Cole

Blurb:
All Wrapped Up is Book Two in The List Series.
Mari and Luca continue to work through their list of sexual fantasies in All Wrapped Up, Book Two in The List Series. They've abandoned their original plan of no strings attached and, for the most part, Mari's learning to be okay with it. She definitely likes Luca's strings (and whatever else he might use to restrain her), but she's not sure she's ready to take the next step in their relationship. Luca, sweet, strong, commanding Luca, insists that it's time to move in together. Mari insists it's time to relax and enjoy what they share without complicating things.
With every moment they spend together, Luca shows Mari how good they could be together. Will Mari run away from her emotions, or does Luca have her all wrapped up?
All Wrapped Up is a novella length erotic romance and contains mature adult themes, including graphic and explicit sex. 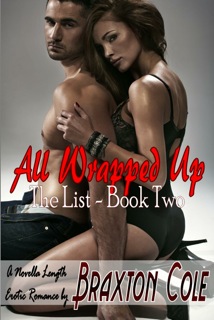 Mari meets Luca on an adult website. She’s still smarting from a divorce and only looking to explore her desires. They create wish lists of their sexual fantasies and agree to work through them together. No strings, no attachments, nothing but pleasure, and Mari anticipates their first meeting with impatience. But through a miscommunication involving a private text message and Mari’s nosy brother, Luca ends up at her 30th birthday party, before their planned rendezvous. Much to her surprise, they seem to connect better than she expected, and in ways she hadn’t expected. He’s strong, commanding, but also gentle and respectful and he makes her ache in ways she never thought possible.

But when Luca later expresses a desire for something more than just casual sex, Mari's impulse is to run the other way. After all, her failed marriage is evidence that she really shouldn’t go much deeper. Can Luca convince Mari otherwise? Can he help her see that he's her ultimate birthday wish come true?

Birthday Wishes is Book 1 in The List Series is intended for an adult audience only and contains mature themes, including graphic and explicit sex. 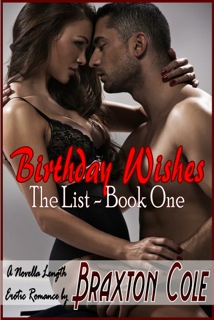 Birthday Wishes can be bought --->>>HERE
Author Bio:
Braxton Cole lives in the Pacific Northwest where she spends most of her time holed up in her office writing stories. When she's not writing, she can be found riding her bike, hiking the fabulous local trails, chasing her kids, or wishing that her thumb was a little more green. She has a bad habit of killing what she tries to grow, but hasn't given up hopes of one day being a successful urban farmer.