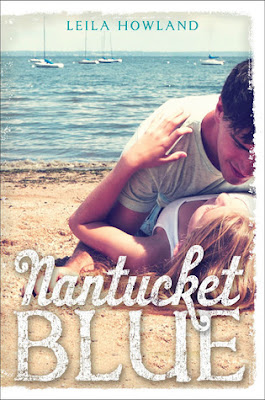 Blurb:For Cricket Thompson, a summer like this one will change everything. A summer spent on Nantucket with her best friend, Jules Clayton, and the indomitable Clayton family. A summer when she’ll make the almost unattainable Jay Logan hers. A summer to surpass all dreams.

Some of this turns out to be true. Some of it doesn’t.

When Jules and her family suffer a devastating tragedy that forces the girls apart, Jules becomes a stranger whom Cricket wonders whether she ever really knew. And instead of lying on the beach working on her caramel-colored tan, Cricket is making beds and cleaning bathrooms to support herself in paradise for the summer.

But it’s the things Cricket hadn’t counted on--most of all, falling hard for someone who should be completely off-limits--that turn her dreams into an exhilarating, bittersweet reality.

A beautiful future is within her grasp, and Cricket must find the grace to embrace it. If she does, her life could be the perfect shade of Nantucket blue.

Nantucket Blue can be purchased on Amazon and Goodreads.

Dee's Review:
I am going to start by telling you this book moved a little slow for me. I got a little frustrated with Cricket. I just wanted to yell at her to grow up and stop acting like a teenager.  Then I remembered, she is one. And I start to think back to when I was a teenager...yikes...those are scary thoughts...*shivering*... back to our book. So our Cricket has a bit of a falling out with her best friend Jules after Jules suffers a terrible loss. I feel bad for Jules, I do. But I didn't think Cricket did anything wrong. But then again, we are talking teenagers here.

So Cricket finds a way to make it to Nantucket to spend her summer. She gets a job and finds a place to stay. She finds good friends, and more importantly, love. I didn't expect her to fall in love with anyone other than who she has been pining over for years. But it's a beautiful Love. I love their story of how they fall in love.

I also didn't expect her and Jules to be so distant. And Jules is so mean. The things she says and does, so mean.. but again, teenagers. See.. told you I got frustrated.

Just when I thought things were starting to straighten out and work out, Jules walks in the morning after Cricket loses her virginity. Let's just say, it didn't go over well.

All in all, liked this book. I was glad when Cricket stood up for herself, whipped her mom in shape, and went for who she really was in love with. About time Cricket, you go girl.

I give this book 3 Hearts.

LEILA HOWLAND loves to read, explore L.A., and engage in funny and meaningful conversations with her friends and family, especially her brother who calls from Washington D.C. whenever he’s waiting for the bus. A lot gets discussed in those phone calls, but they tend to end abruptly when the bus shows up. She can really cut the rug, but wishes she could sing without people covering their ears. A graduate of Georgetown University, Leila spent five years acting in New York where she was a company member of the award-winning Flea Theater in Tribeca. It was a lot of fun and she often talks about “getting back into it.” The closest she has come was a stint as an extra on The Young and the Restless in 2010. Leila now lives in Los Angeles with her husband and two dogs. She teaches high school English and blogs for HelloGiggles. NANTUCKET BLUE is her first novel.

You can find Leila on Twitter and her blog site.
Posted by Unknown at 4:00 AM