Keeping Secrets I and II by Kitten K. Jackson

Ok let me start all this off by saying that I want to marry Kitten K. Jackson! I did not get another perfect love story with Keeping Secrets in fact I got a fucked up....what the fuck am I reading but can't put down edge of my seat read!!! Yeah like that. I am soooo thankful. I needed that, seems that even though I love my HEA's thats all I get now. So this mind fuck of a thriller is GRRRREAT!!!

So this is typically not how I start my reviews but well I am Sandie and I love keepin you all on your toes. 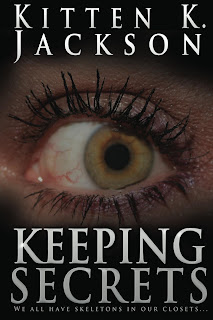 “It was easy. She spells her name with an ‘ie’, instead of a ‘y’. Abbie Rae Kolbeck. I searched it, and there she was.”
“Dude, how is it that she doesn’t know it’s you? You don’t have any photos on?”
“No, I have photos. Like I said, she knows me as Johnny Moretti. And when she knew me, I was this skinny little geek with big, wavy hair, bad teeth, zits, green eyes and big-ass glasses. Now, I’m four inches taller, about 50 pounds heavier, my hair is short, and I have the mustache and goatee. Oh, and I got my nose fixed. And I have brown contacts. And I had braces.”
“You got a nose job?”
“Yeah. Before I met you.”
“Yeah. You didn’t look like that when I met you.”
“That was the idea.”
“Hmm. So why did you send her the friend request?”
“I want to see her.”
“You what?”
“I want to see her.”
“Greg, you’re drunk. Let’s talk about this when—”
“No! I haven’t been drunk for the past 15 years! I’ve never stopped loving her, and
I’ve never stopped wanting her.”
“But Greg. You said you’ve done something that could get you’re a*s thrown in prison. What’s the statute of limitations for rape down there?”
“In Florida, there isn’t one.”
“What? You mean, for the rest of your life, you have to worry about going to prison?”
“I guess. I’m not sure the law’s reto…retroactive, but that’s Johnny Moretti. I’m not Johnny Moretti.”
“Greg, do you hear yourself? You need to go home and sleep this off, and in the morning, you’ll see how crazy this is.”
“I didn’t come up with this tonight, Mark. I’ve been thinking a lot about it on and off for the past few years.”
“Mostly off, I hope.”
“No, mostly on. And I think I can pull it off.”
“Look, going to a new place and starting over as someone else is one thing. But going back to where people knew you before and pretending to be someone else is a different thing entirely.”
“I’m not pretending. I am someone else.”
Greg reached into his back pocket. He pulled out his wallet and started going through it. There in the back, under some business cards, was a picture of an unattractive, skinny boy with shoulder-length, big hair, a huge nose, bad teeth, and big, ugly glasses. He showed Mark the picture.
“Does that look like me?”
Mark studied the picture, then looked at Greg. “No. Not at all. Damn!”
“See what I mean?”
“Okay, but what about your voice? Surely, your voice isn’t different from when you were in college.”
“That’s the only thing I’m a little bit concerned about. But back then, I was a southern boy. Now, I’m a full-on New Yorka. Fuhgetaboutit! Ya know? I’m a completely different guy, other than maybe my voice sounds a little like someone she used to know.”
“Yeah, someone who raped her! If you weren’t drunk, you’d realize how ridiculous that sounds.”
“Hey, I’ve thought this through when I was sober, and I know it’s a big chance, but I think it’s something I have to do. It’s a chance I have to take, Mark. She’s the reason I can’t, and don’t even want, to get close to anyone else. I still love her!”

Book Trailer <--- Click that
*********************************************
Back to the review....as you can see Greg is a pretty effed up guy. I know what your probably thinking WTF is wrong with you. I know I know but don't get a judgey on me now. Alright so yes Greg or Johnny as he was known in the past raped Abbie. A beautiful woman back in college. She never really gave him the time of day and he was a shy and well by description not all that good looking. After he does this and she recognizes him and he flees, becomes a whole new person Greg.

nope that wasn't what I was expecting. Greg (Johnny) now 14 years older decides to look up Abbie. OK I will admit that is kind of creepy and weird but I went with it, because now I was all in, needed to see how this all played out.

I am so glad I kept reading, lets see if I can get a good rundown without giving too much away ready....
Abbie and Greg begin to date, saw that coming but what I did not anticipate was the way I would feel for Greg. Several times I was like awww maybe he's not so bad, then Id be like what the hell, back to ok this is weird, and then finally WTF was that!!!

My concern was for Abbie, because it was like lie upon lie upon lie...but then I would be like wait was he lying? is something else happening that I can 't see coming? WTH?....and I couldn't stop spinning.

Then dead bodies began to appear and I was like oh hell nooooo. It just got crazier and crazier. I think Kitty seriously had me like this

By the end I was just OMG seriously? seriously!!!! I didn't know if I wanted to hug Kitty or smack her for making me go through all of that. LOL

Needless to say I enjoyed the ride. NOT a HEA if thats what you are hoping for. This is a suspense filled book. With craziness, seat gripping suspense. I loved every damn minute of it!!!
for that I gave this book


Where to buy Keeping Secrets:
AMAZON//B&N//SMASHWORDS

About Kitty (my new love haha!) 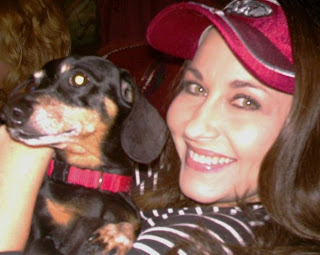 Why the middle initial? Well, with a name like “Kitten,” I was hoping the middle initial would give it a more serious, “grown-up” sound. And no, I was never a stripper, contrary to what the name might convey! LOL! My dad started calling me Kitten when I was only days old, so there was no pole dancer connotation intended there!
I wrote both Keeping Secrets and Keeping Secrets II in 2012. I then went back and edited and published the first book in December, ‘12. Then I edited and published the sequel on Smashwords on May 5th and on Amazon on May 8th of this year.

I’m from Muscle Shoals, Alabama (Roll Tide!). I’m in Wilmington, North Carolina now, homesick for my daughter, the rest of my family, and sweet home Alabama. For those of you who don’t know, Muscle Shoals was “The Hit Recording Capital of the World” back in the late 60s, through the 70s. Everyone from The Rolling Stones to Aretha Franklin, and lots in between came to that tiny town on the Tennessee River to record hits such as Wild Horses, Brown Sugar, Mustang Sally, When a Man Loves a Woman, and many more. And I went to school with the sons (great guys) of the man who started it all at FAME Recording Studios—Rick Hall.
My best friend is my little black and tan doxie, Peej. “Peej?” you might ask. Peej is short for PJ. PJ is short for Precious Jackson. Peej was my dad’s baby. When he died in 2009, she became mine. When I would tell people her name was PJ, they would say, “He’s so cute.” So I started calling her Peej, which just confuses everyone, but it’s okay. It fits her.

a Rafflecopter giveaway
Posted by Unknown at 6:31 AM