Dee's Review of Lover in Law by Jo Kessel

Lover in Law
By Jo Kessel

Blurb:
Harboring an unmentionable secret is not an obvious route to maternal bliss..........or is it?

Ali Kirk's had a bad year. An ambitious London lawyer, her courtroom performances have started to slide and her obsession with having a baby is undermining her relationship with 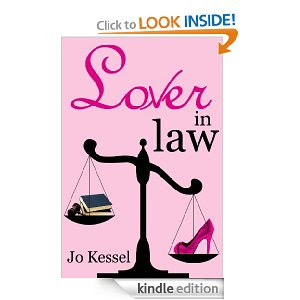 boyfriend Adam. Come January 1st she resolves that in the next twelve months her life has to turn around.

Life, however, is about to get worse. Busy juggling fertility tests with a high-profile criminal trial at the Old Bailey, Ali starts burning the midnight oil with powerfully handsome colleague Anthony de Klerk. On a night that she's slipped on some sexy underwear to boost her flagging self-esteem, Ali and Anthony finally end up in bed together. And then she falls pregnant. Ali turns super sleuth on her own secret paternity suit - who is the father, Adam or Anthony?

En route to childbirth there are romances and rows, dalliances and denials, secrets and suspense. And the ultimate, uncomfortable realization that only one thing will set Ali free: the truth.

Dee’s Review:
I have to give a warning about this book before I tell you how good it was. For me, it moved a little slow. I’m not going to lie, there were times where I was wishing things would move along. Not that the story wasn’t good, but you know me, I love the action and drama. That being said I liked this. I thought it was cute.

I feel bad for the guy who gets hurt in the end, and no I won’t tell you who. But sheesh, the drama that goes down...Man! Didn’t see that happening. I don't know I would've waited as long as she did. I think it was unnecessary and drawn out, but that is just me. I think all parties involved deserved to know what was going on.

And then when she had to take her sister to the clinic, OH GOD.. my heart broke for her and her sister both. I could never make that decision, but gladly it wasn't my choice to make. And man, it felt like she was never going to get what she wanted. However, for the ending we have, I really don't feel bad anymore. It's perfect. The way it all works out.. Wonderful. Love always prevails. Anyway, Ali is a lawyer and she is a handy little lawyer. She's a little sleuth on top of being a good lawyer, a sneaky little woman willing to do whatever it takes to get the proof she needs. She sure surprised the hell out of me. But I do have to admit, I did get the creep vibe from her client. He creeped me out the whole time. Even after the court case was over. I felt like she needed to keep an eye on him at all times. Just major creep factor.

I mean what the heck is up with the mobster guy!?!?! I don't know how she did it. But she stuck it out, while pregnant at that. While upending her whole life, making major life decisions. And don’t even get me started on the baby daddy drama!! It was epic. Like I said. Perfect ending to the whole situation.
I give this book 3.5 hearts

Lover in Law can be bought here on Amazon