Twenty-one year-old Maddie Asherford is haunted by a past she can’t remember. When she was fifteen
years old, there was a tragic accident and she was left with amnesia.

In the aftermath, Maddie’s left struggling with who she is—the forgotten girl she was six years ago or
the Maddie she is now. Sometimes it even feels like she might be two different people completely—the
good Maddie and the bad one.

Good Maddie goes to therapy, spends time with her family, and works on healing herself. Bad Maddie
rebels and has dark thoughts of hurting people and sometimes even killing them.

Maddie manages to keep her twisted thoughts hidden for the most part. That is until she starts having
blackouts. Each time she wakes up from one, she’s near a murder scene with no recollection of what
happened the night before and this helpless feeling like she’s losing control of her life. Maddie doesn’t
want to believe she’s a killer, but she begins to question who she really was in her past. If she was bad Maddie all along and that maybe she was a killer. 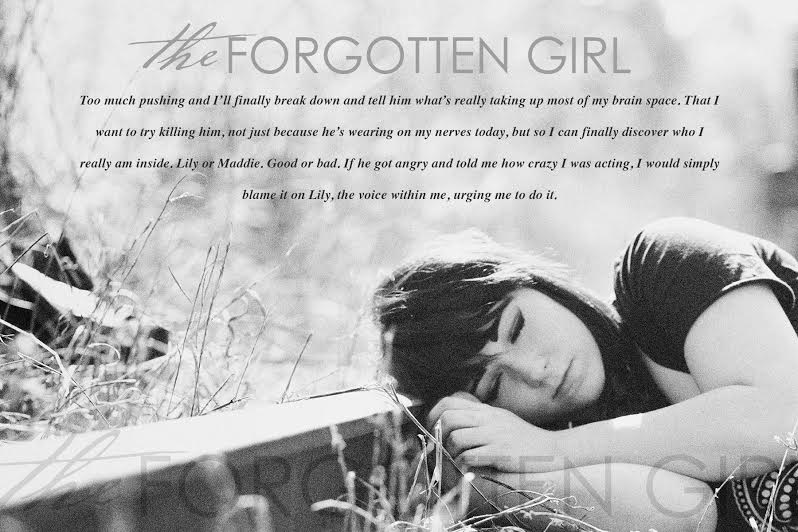 “You’re going to be okay, Maddie.”

The person continues to stare for a while before crouching down beside me. I have the strangest
compulsion to reach up and claw their eyes out, hurt them, but I can’t lift my arms up. They lean over
me, sheltering my face from the rain with theirs. I still can’t see their expression or facial features, but
know their watching me. Studying my wounds. My heart thrashes. Quicker. Quicker. Quicker. My chest
moves with it, gasping for air. I can’t hear, see, think. Who am I?

The person silently assesses me with their head titled to the side, putting a cigarette into their
mouth. They strike a match and light the cigarette, puffing on it a few times before pulling it out of
their mouth. Then they reach over me, their fingers seeking my hand, smoke dancing into my face and
nostrils. Then he utters softly, “Wait, you’re not her.”

Not who? I start to shake, scream, try to move, my heart racing so fast inside my chest it aches
deep inside my muscles. My adrenaline soars, blood rushes through my body. It’s too much. I get dizzy,
the world becoming colors and shapes that I can’t make sense of… I can’t make sense of anything. But I
feel the touch of fingers on my hand as they pry my fingers open easily, despite my desperation to hold
onto it. The object falls out. Plink. Hits the pavement. My heart slams against my chest so hard it knocks
the breath out of me. I suck in an inhale and scream as loud as I can. Pain surges through me, fills my
head. It feels like I’m splitting in half, becoming someone else, part of me dying. Kill him. I lift my hand up toward the stranger as he watches me through the dark, unafraid. When my fingers graze his neck, I fold them around the base and squeeze, strangling him. He doesn’t fight back, just remains crouched beside me, as if saying: Go ahead. Do it. Kill me. And I do until I open my mouth and finally get my scream out, the pain in it evident and burning it’s way through my body.

“I don’t want to be here anymore!”

“It’s going to be okay,” he whispers as he gasps for air. “I promise.”


But he’s wrong. Because moments later the rain drowns me out and everything goes black.

Will be sold EXCLUSIVELY on Amazon until June 13th
AMAZON

Has Jessica ever steered me wrong?

This book had me so enthralled right from the jump. I wasn't sure what to think, what to believe. My mind felt like it was going crazy. It kept trying so hard to fit the pieces together, to lock them into place and they couldn't. They wouldn't go together. It was like a jigsaw puzzle but nothing connected, until it did.

This book still has me reeling. I didn't know which way was up. There were times I was so scared I didn't want to continue. The feelings this book evoked in my senses, had me so hyperaware that late into the night I reached over to grab my husbands hand just to remind myself that I was safe. While reading I just kept thinking "Oh Gosh now what?". It had me on the edge of my seat, I wanted more but was scared of what the next few pages would bring.

Poor Maddie or is it Lily? That was the question and a great one at that. At times I didn't even know what or who I was getting. All the people in this book had me questioning what the bloody hell was happening. Everyone was sketchy, nobody made sense. Were they even real? Was she just imagining all of this? Why didn't her mom give her answers AAARRRGGHHH!!! Why is everyone around her dying? WHAT THE HELLLLL???!!!

Jessica Sorenson knows how to write. This book is riveting. Had me on the edge of my seat, I could not put it down until I was finished. I was so captivated by the storyline and the characters, I needed to know more. I had to know who, what, where and why?! Even though I got my answers I am still stuck in this story. I keep going over and over certain scenes. It's just that good.

Jessica has easily catapulted to my all time favorite writers. She is so diverse and knows how to write books that make me coming back for more. This book is another example of how her mind is just beyond and takes her into another level of cleverness in writing.

The New York Times and USA Today bestselling author, Jessica Sorensen, lives in the snowy mountains of Wyoming. When she's not writing, she spends her time reading and hanging out with her family.

a Rafflecopter giveaway
Posted by Unknown at 6:20 AM