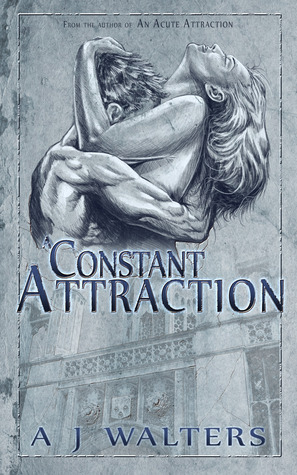 Book Summary:
Funny, thrilling, romantic and spellbinding. This sequel to An Acute Attraction, will have you hooked!
When the voluptuous and curvaceous, Isabel Chambers decided to take a child-free week away to Cambridge; never in a million years did she think she would meet the 'God of a man', Marc Chambers, Professor of Medicine.
Having been convinced by her best friend, Jackie Dowling to go for it, it was probably the best thing that could have happened...or was it?
Isabel and Marc have dark pasts, for which both are wanting to overcome. However, the jealous and conniving Dr Emelie Acerbi has different ideas and is determined to spoil what connection, relationship and possible future the two have together.
Can Marc and Isabel continue to share the passion and thrills they have for one another? Or will the demons from their pasts and present get the better of them?
Let Constant Attraction take you on an emotional journey of compassion, anger, laughter, lust and love.

About A J Walters:
A J Walters is a new contemporary romance author who made her first appearance on the indie circuit in December of 2013. Having interests in history, romance, and elements of erotica, she has brought all of these together in both her debut publication of An Acute Attraction, and it’s sequel, Constant Attraction.

Wanting to break the trend of size 12 virgins in books, A J Walters has introduced a new real woman in Isabel Chambers. She’s a size 18-20, working single mother who now feels is it her time to start living her life again. At the ripe young age of 39, A J Walters also wanted to show that you can experience everything that a twenty-something would.

“I saw that a 39 year old isn’t quite at retirement age for fun, sex and finding love again. There are so many women out there that can be represented in books as well as the slim, innocent and beautiful types. Don’t get me wrong I love reading books with them in, but there is so many of them around now I felt it is time for something different. I’d like to think I brought my sense of humor across in it as well. I am ditsy, I suffer from ’foot in mouth’ syndrome, but I can also be serious and sentimental. From the feedback I’ve had, apparently it makes for a great writing voice.”

A J Walters currently lives in North Staffordshire, UK with her 2 children.


Shannon’s Review
Let me start by saying if you haven’t read Acute Attraction then you NEED to read it first. Not only because it is a good book but to understand A Constant Attraction you would need back stories of the characters from the first book.
A Constant Attraction starts off where Acute Attraction left off. It begins with Marc and Isabelle still together and Isabelle’s friend actually meeting him.
It was great seeing these two together again. You will get a lot of your questions answered in this book and see what a crazy bitch looks like.
I can’t say too much about the book without giving it away but it is well worth the read. You will enjoy seeing how a man sees a woman for what she truly is.
I am giving this book 4 hearts.
Posted by Unknown at 6:00 AM