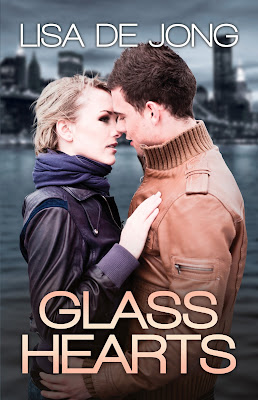 Blurb:
Sequel to Plastic Hearts...
Can a relationship survive on love alone? Is love truly enough?
Dane and Alex’s relationship has never been easy, but now they have a fresh start without the pressures
of Alex’s family. Together they try to move forward while continuing to struggle with a past that they can’t seem to escape.
Sometimes no matter how hard we try to make things work, love isn’t enough.
Sometimes even after a broken heart is mended, cracks remain, and the same doubts and insecurities that once yanked us apart seep in.
Can true love hold Dane and Alex together or will their hearts completely shatter like glass?

Excerpt:
She doesn’t have time to reply before the buzzer sounds.  Nolan.  I completely forgot about Nolan.  “Are you going to get that?” she asks.  Crap.  I say a silent prayer as I head toward the door to buzz Nolan up.  Alex had a shitty day, but Nolan needs me too.
“Did you even ask who it is?” This is a valid question.  We live in fucking New York City, and you don’t just buzz people up to your apartment without asking who it is first.
“I know who it is,” I say, looking up in her direction.  Her brows are furrowed and she looks worried. It’s time to let the surprise out of the bag.

WOW! That is all I can say. I loved Plastic Hearts Review is up on my blog, but you all know me and my hateness for books that are cliche. So yes, Plastic Hearts surprised me and I loved the book, so when asked to read and review the Sequel I said...

We pick up literally right where the last book left off. Now if you haven't read Plastic Hearts I am not going to give away the ending but lets just say Alex (Alexandra Riley) was taking a HUGE risk in doing what she did. It pays off and I am so glad. I love Dane. Like he is you know the typical boyfriend that only has eyes for Alex but he is much more raw. Bad boy ummm yup well no, okay appearance wise yes. He has tattoos, he owns a motorcycle but he has changed his ways and is determined to clean up his life.

In this book we get more of Alex and Dane and their messed up lives. No matter how much either of them try to change their past always haunts them. Do you ever start to read a sequel and feel like it just doesn't live up to the first book?

I can tell you NOT.THIS.BOOK! I was pleasantly surprised at the things this two needed to get through to make their relationship work. First off Alex is no longer supported by her parents. She has to join the real world and look for a job, which is hard to do especially if all your life things have been handed to you. She did me proud and even though she failed the first couple times, Dane was there to comfort her and tell her she could do it.

Eventually she does land a job and although I would hate to live with my boyfriend and work with him, it uh yeah well it gets interesting. And oh man her boss! I was like ewwww creeper much.

IDK he just gave me a weird vibe. There is secret with him that you have to read to find out what it is, believe me I was kinda in shock!

again you have to read the book to see what I mean. This book just kept getting crazier and crazier as I read. I thought I knew but ended up guessing wrong. Then Nolan, oh Nolan I really want this guy to get his shit together like his brother did. I would love to read a book about him because I seriously think his story would be great. He's confused, dysfunctional, raw and gritty and everything that makes me just want to reach in and save him.

I feel so bad for Dane, because no matter how much he truly wants to change his life his mom and brother just never seem to fully let him.

I was sad for the mom. I was upset with the way she just shoves shit away instead of dealing with it, I guess being an ex junky its hard to be a mom and help put things into prospective for your children, but it still drove me nuts!

Then there is Jade. I know her secret! and I am like hello Alex is your BFF let her help you damn it. I swear these peeps are all closed up and it drives me nutso! Oh and Gwen (Alex's sister) her too, I was yelling in my head grow a pair of tits and leave that damn asshole.

We do see Alex's parents in this book and yes the momster <--- (I spelled it like that on purpose) is back but luckily we don't have to read about her for too long. That lady makes me want to slap the crap out of her. Alex's dad redeems himself and I am really glad, because Alex needs that. I enjoyed the second book and the ending was the best. I liked that fact that they had real problems and how they struggled with certain things but they loved one another enough to make it through BUT yes there is a BUT ummm Lisa idk if you know this but tattooing someones name on you is bad luck and usually that relationship never lasts. (just saying) I know Kellan got Kieras name but these are books and its fictional or maybe its the fact that like 10 or so of my friends guys and girls have gotten their partners ummm ex-partners names tatted on them and then the relationship ended. But hey maybe that is just my world :)

I gave this book 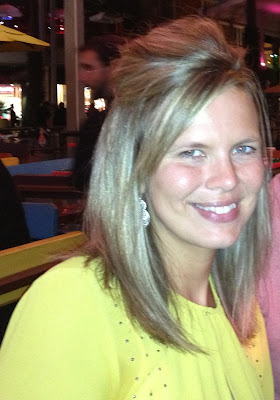 Lisa De Jong is a wife, mother and full-time number cruncher who lives in the Midwest. Her writing
journey involved insane amounts of coffee and many nights of very little sleep but she wouldn't change
a thing. She also enjoys reading, football and music.

Where to find Lisa:

WHERE TO BUY GLASS HEARTS:
BARNES AND NOBLE
AMAZON
SMASHWORDS
Posted by Unknown at 7:48 AM