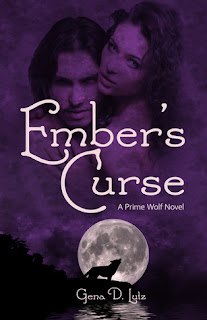 I was honored and excited when asked by the author to review her book. I have a fondness for paranormal novels. I am a sucker for Vampires, Werewolves, Witches, Warlocks, Shadowhunters, Fey etc..When I learned that this book had pretty much all of these I was immediately drawn in.

Ember is a hybrid: half Werewolf half Vampire. I thought to myself," how the heck is that combination even going to work?" The author did Ember's genetic mutation justice the further I proceeded to read how and why she is a hybrid. Long ago a Witch cursed her pack leaving the women incapable of feeling love until they find their heartmate. Ember is not one to follow rules and is regularly in trouble for causing commotion with other packs. Something goes awry as several of her pack mates have disappeared. Ember comes home to find that her best friend Harper, a Vampire, has been attacked and left for dead. Nathan, a member of her pack and other best friend calls in his cousin Collin, leader of the Adelphi, "a group handpicked by each of the different species' elders that currently inhabit the earth. They were given the power to disband, incarcerate, and execute any supernatural being that broke our laws" to help them figure out what and who is doing this. Collin is a hot sexy beast, tall, well-built with a deep voice and beautifully vivid green eyes (yum) that turns out to be Embers heartmate. Even though these two are ecstatic for finding one another, their happiness is short lived as they investigate the disappearance of her pack mates. Enemies are coming at them from all sides as they struggle to keep each other alive and protected.

I enjoyed the story of Ember and Collin. I appreciated that Gena Lutz used these magical beings in their traditional sense. You know, where werewolves die by silver, Vampires by sunlight, and holy water etc...The secondary characters brought out a bit of fun and had me laughing at certain points in the book. I love Ember's best friend Harper, that girl is one tough Vamp. Another character I really enjoyed was Tegan, Collins niece. She is one witch you do not want to mess with! I absolutely liked the fact that Ember was a strong female character from the get go. She was tough and kicked ass right from the beginning. Collin helped her grow and see her true potential. He was her equal, not her dominant. Collin is the man who loves his partner and listens to her, he is there as a protecter but at the same time lets her get her hands dirty while standing beside her encouraging her. The only thing I felt was flawed was the fact that certain scenes went by too fast. It seemed as though they would start a fight and then a few sentences later it was over with no explanation as too how it got there. How did it end? Where did everyone go? Who got shot? Whats going on? I felt cheated out of the action and I wanted to see who was left standing and why. Other than that it was a great read. Action, romance, kick ass women, and suspense. I can not wait for the next installment of the series as I am now invested in the characters. I would say that Collin is a contender to be on the list of book boyfriends. He is an Alpha male who protects and loves his mate with his whole being, what woman doesn't want that?

I rated this book: