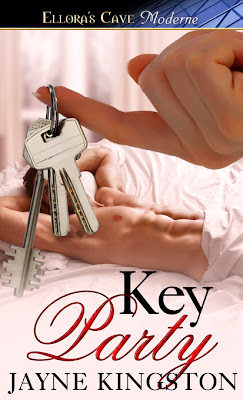 Blurb:
After five years of living abroad, Rachel has returned to Chicago. As a welcome-home present, one of her best friends throws a ‘70s-style key party. A night of mingling and anonymous sex with one of Petra’s hunky friends seems perfect.
Petra knows about the crush Rachel had on Ben in college, and she rigs the game so Rachel ends up with the very fine young doctor. But Petra doesn’t know the whole story. Rachel never told her friend about the scorching-hot make-out session that is now Rachel’s go-to sexual fantasy.
And neither of them could know Ben is more than looking forward to showing Rachel every carnal moment she missed when she left without finishing what they’d started that night.

He was circling her, moving around her slowly as though he was a great dark wolf sizing her up, his prey. As much as she wanted to the clothes to go flying and the fun to begin, she was enjoying the way he was drawing out the moment.
“We don’t have to do this, Ben,” Rachel offered, suddenly and hugely embarrassed to have been so obviously set up by her friend. The fact that he remembered her was one thing. Still wanting anything to do with her after the way she’d run out on him that night back in college, and then never contacted him again, was another.
For as nervous as she was to finally have him in her bedroom, the absolute last thing she wanted was for him to back out and leave. How many years had she been replaying the night they’d made out on his couch in her head? How many times had she imagined going back to finish what they’d started?
Really, there were too many to count.
“Oh, no,” he taunted, moving around her again. “I’m not letting you get away so easily this time,” he breathed close to her ear.
She could feel the heat of his body against her back. His fingertips brushed her neck just below her hairline. Her skin rippled with goose bumps and a fresh wave of heat rolled out from her core.
“You and I have some unfinished business to attend to, don’t we?”

Author Bio:
When Jayne Kingston was growing up she spent many hours daydreaming about a time when she could flee the too-small town in Ohio where she grew up and run laughing for the sunny West Coast. Of course she stuck around and raised her family in that small town instead, and doesn’t regret it for a moment. Now she spends her days dreaming about the delicious fun two people can have while falling in love.
Find Me Here Links:
Website//Email//Facebook//Twitter//Goodreads

a Rafflecopter giveaway
Posted by Unknown at 7:00 AM