It is release day! Congrats to you Sierra.

There are many rules a priest can't break. A priest cannot marry. A priest cannot abandon his flock. A priest cannot forsake his God. I've always been good at following rules. Until she came. My name is Tyler Anselm Bell. I'm twenty-nine years old. Six months ago, I broke my vow of celibacy on the altar of my own church, and God help me, I would do it again. I am a priest and this is my confession. ***Priest is a standalone, full-length novel with an HEA. For mature audiences only.*** 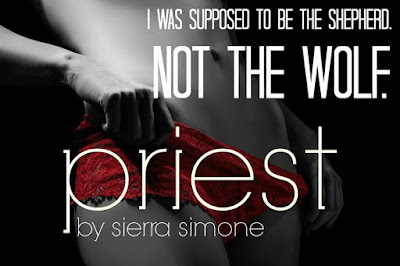 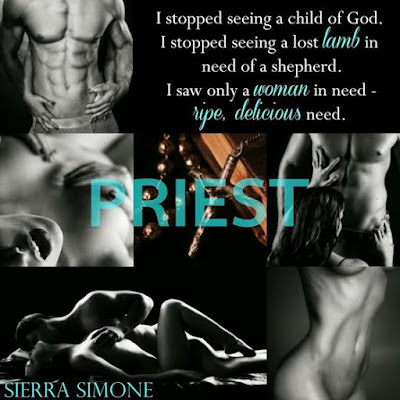 OOOh it's a taboo read!

Taboo reads are cool, I like pushing the limits and this book being about a Priest sure did push the limits.

All over my feed theres was this buzz that grew and grew. My friend text me about the book and I was intrigued. I wanted to see why it was so hyped and if it was as good as the people who had read it said it was.
I had no idea what to expect, which I love because then I get no other peoples opinions in my head.

Tyler Bell is a Priest who is hot. He became a priest due to circumstances from his past. I will not tell you what that is because you need to read it for yourself. He loves being a Priest and his congregation. He is a leader and even though his days can be monotonous and dull he knows he is carrying out the Lord's work and that is all he wants to do.

Then one ordinary mundane day she walks into his confessional.

Poppy is a woman who walked away from everything she ever knew, starting her life over. She is evaluating certain things. Never being one who grew up in church she wasn't sure how to do this, pray and stuff. She hears Father Bells voice and curiosity sets in. She looks him up on the church website. Of course he's hot but that is not the only reason she continues to go to confessions.

Alright this is where it starts to get interesting and there is sex...lots of it.

I know for most people the fact that he is a HAWT Priest who has dirty sex would be appealing but I wasn't entertained. I got bored. I put the book down for about a week.

Now before you get all crazy I will explain why. It has nothing to do with the fact he was a Priest, I thought that was hot. It was that I could not connect with the characters. I was waiting for something...maybe a build up? There was no build up it was like WHAM BAM they're both in love. Huh? Wait! WHAT? did I miss something?

The more I read the more discouraged I got so naturally I felt that I needed to step away. The writing is really good. The plot good, I just wasn't sure what it was. So I stepped away.

Coming back I opened my mind ready to embrace them but I just couldn't connect. I tried, I really tired. I wanted to love this book as much as everyone else but I needed more from Tyler and Poppy. The insta love was just not working for me. Then his inner monologue I just couldn't take it. Seriously if he was that devote to God I'm pretty sure he wouldn't say half of what he did, then again maybe he would who knows.

For a long time the story sat at 3 stars for me. The sex was good. The book was written well and the story was okay. What had me bump it up to a 3.5 was the ending (no not that it ended). Things happen in the story and I was a bit  confused and that is when it started to suck me in. From that point forward I was like OMG what!? too bad it was the last 15% maybe 20% all I know was that I loved the ending. I felt so happy after that it wasn't enough to get bumped higher but that was only because like I said I couldn't connect with the characters the first 80%.

I never give up on a book. The whole time I have been reading I have only DNF'd 1 book. I believe that sometimes the story can get better. A character can redeem themselves, if I don't get to the end I wont know. That is why I put books down and come back, so glad I did because I enjoyed it.

If you are looking for a taboo read with good sex then defo look into this book. I give the author kudos for going against the grain.

About the Author Sierra Simone is a former librarian who spent too much time reading romance novels at the information desk. She lives with her husband and family in Kansas City.