Take Me with You by K.A. Linde Review 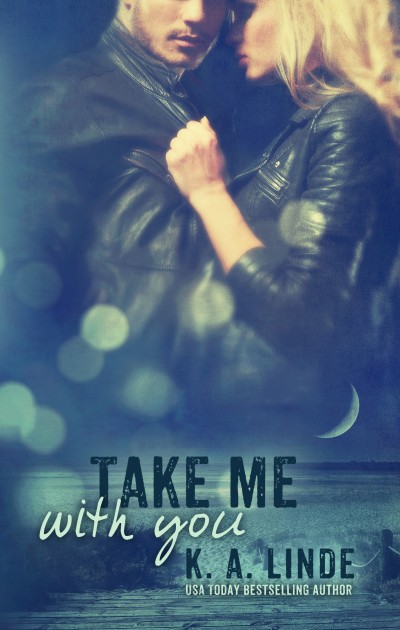 Grant practically bounded across the room until he was directly in front of me. Then, his hands were cupping my cheeks so tenderly that it was as if he thought I might break in half. Without a word, his mouth dropped down on mine, and the kiss was as light as a feather. It was a question, a soft and delicate question, one he had never asked before—permission. When I didn’t pull away from him, he received his answer. The kiss deepened, and he coaxed all the anger out of me. He drew it out as if sucking venom from an open wound. He kissed me so heatedly and lovingly that not even a drop remained. All that was left was a bottomless well of emotions of how much I loved and missed him. When I came back into the moment, I heard the catcalls and yells from the people around us. It was then I remembered that we were in a crowded room, surrounded by people, and Grant had kissed the breath out of me. I flushed from head to toe at the attention, but he wouldn’t let me pull away. “I’m sorry,” he whispered. “I shouldn’t have blown up on you. I shouldn’t have done anything. You’re all that matters.” I stared up at him in confusion. “Who are you, and what have you done with Grant McDermott?” He laughed that beautiful glorious laugh, and a smile lit up his whole face. It was that damn smile that had won me over in the first place. “Run away with me,” he murmured. “What?” “Run away with me. Let’s get out of here.” “Where are we going?” “Anywhere. Everywhere.”

USA Today bestselling author K.A. Linde has written the Avoiding series and the Record series as well as the new adult novels Following Me and Take Me for Granted. She grew up as a military brat traveling the United States and Australia. While studying political science and philosophy at the University of Georgia, she founded the Georgia Dance Team, which she still coaches. Post-graduation, she served as the campus campaign director for the 2012 presidential campaign at the University of North Carolina at Chapel Hill. An avid traveler, reader, and bargain hunter, K.A. lives in Athens, Georgia, with her fiancé and two puppies, Riker and Lucy.
Facebook | Website | Twitter | Goodreads
♥READ THE SERIES♥
Book 1 - Take Me for Granted
Amazon | B&N | iTunes
Book 2 - Take Me with You
Amazon | B&N | iTunes

Shannon’s Review
If you haven’t read Take Me for Granted I suggest you do before reading this book.
Grant is back with all his sexiness in this book. He is hot as hell and still has his moments.  He still has his problems with girls throwing themselves on him but hey he is a rock star. He tries really hard in this book to be the devoted boyfriend to Ari. Although Ari seemed a little bit more whiny and still didn’t have much of a backbone in the beginning of the book. She was still having issues with her family and getting her s**t straight.
I do like how their relationship evolves in this book. I loved reading about these two and the struggles they had to face. And by the way phone sex is extremely hot. Just saying.
I am giving this book 4 hearts.
Posted by Unknown at 5:30 AM

Email ThisBlogThis!Share to TwitterShare to FacebookShare to Pinterest
Labels: KA Linde, Shannon's Review, take me with you