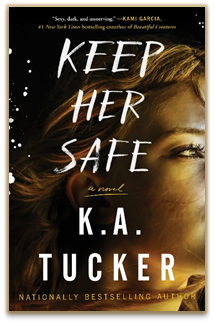 Noah Marshall has known a privileged and comfortable life thanks to his mother, the highly decorated chief of the Austin Police Department. But all that changes the night she reveals a skeleton that's been rattling in her closet for years, and succumbs to the guilt of destroying an innocent family's life. Reeling with grief, Noah is forced to carry the burden of this shocking secret.

Gracie Richards wasn't born in a trailer park, but after fourteen years of learning how to survive in The Hollow, it's all she knows anymore. At least here people don't care that her dad was a corrupt Austin cop, murdered in a drug deal gone wrong. Here, she and her mother are just another family struggling to survive...until a man who clearly doesn't belong shows up on her doorstep.

Despite their differences, Noah and Gracie are searching for answers to the same questions, and together, they set out to uncover the truth about the Austin Police Department's dark and messy past. But the scandal that emerges is bigger than they bargained for and goes far higher up than they ever imagined.

Complex, gritty, sexy, and thrilling, Keep Her Safe solidifies K.A. Tucker's reputation as one of today's most talented new voices in romantic suspense.

HOLY WOW!
I have no idea how K.A. Tucker does this, seriously, no idea!
How can she have me so enthralled and turning pages well into the morning? She bewitches me with her writing and storytelling. Every time I begin one of her books I know to buckle up.

There are times I read books and days later I think about them and the characters. Here I sit a week later still reeling from Keep Her Safe. I keep rethinking certain aspects and the twists and turns. K.A. Tuckers writing again showcases her abilities to weave a story together with a delicate intricacy that had me transfixed.

What can I tell you about this book without giving away too much?

Well, let me try. Noah is a guy whose mother was the chief of police and at one point in time, she had a partner, Abe. Abe was murdered and his reputation as an officer was tarnished as he was branded a dirty cop. Things get revealed and Noah goes to make amends with Abe's daughter Grace. What happens next neither of them expected, and neither did I!!!

14 years later after Grace's father is killed both of these children go looking for answers which ultimately impacts many people's lives. They had no idea where this would lead, and as truths come to light I was just in awe of the authors writing and weaving together of this story. Reading about the past helped to bring the story together. Man, there is just so much in this book that I can not wait for others to read it.

I am never disappointed when I pick up a K.A. Tucker book. These characters and their story has stayed with me and still has me thinking....I mean WOW! Honestly just WOW!!!

K.A. Tucker writes captivating stories with an edge. Her books have been featured in national publications including USA TODAY, The Globe and Mail, Suspense Magazine, and Publishers Weekly. She currently resides in a quaint town outside Toronto with her husband and two beautiful girls.