Hit the Spot by J. Daniels Excerpt and Review Tour 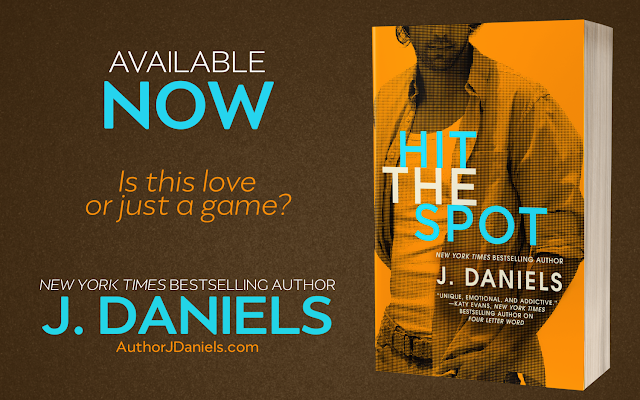 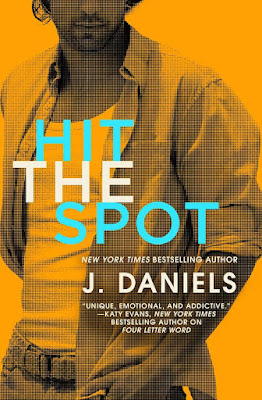 Is this love or just a game? Tori Rivera thinks Jamie McCade is rude, arrogant, and worst of all . . . the sexiest man she's ever laid eyes on. His reputation as a player is almost as legendary as his surfing skills. No matter how her body heats up when he's around, she's determined not to be another meaningless hookup. Jamie McCade always gets what he wants. The sickest wave. The hottest women. And Tori, with her long legs and smart mouth, is definitely the hottest one. He knows Tori wants him-hell, most women do-but she won't admit it. After months of chasing and one unforgettable kiss, it's time for Jamie to raise the stakes. Jamie promises that soon Tori won't just want him in her bed, she'll be begging for it-and he might be right. Somehow he's found the spot in her heart that makes her open up like never before. But with all she knows about his past, can she really trust what's happening between them? Is Jamie playing for keeps or just playing to win? This book can be read as a stand-alone. Book 1--Four Letter Word

Hammerjacks was dimly lit and packed with bodies, some dancing together and others crowding the bar, waiting to get served. I started scanning the room as I came up beside Tori, who was doing the same even though she had no idea who she was looking for. I saw Quinn almost instantly. She wasn’t hard to spot. The bright pink spiked-out hair helped with that. “There,” I said, pointing in the direction of the bar where my sister was sitting on a stool, head turned away from the group of shitheads swarming her. She was alone. That pissed me off. She was here, in town visiting, and she was looking for ass. That pissed me off, too. Not much I could do about the second thing, I understood it, but she was gonna hear my feelings toward the other whether she wanted to hear them or not. “What’s her name again?” Tori asked as we made our way over. “Quinn,” I said. She nodded, face serious. Then she tucked stray pieces of hair behind her ears and smoothed out the rest of her pony, pulled the one sleeve of her shirt down so it exposed her shoulder and bra strap, straightened her spine, tipped her chin up, and put on a smile before rushing ahead. “Hey, sweetie. Sorry I’m late,” Tori chirped, squeezing in between my sister and the shitheads as if they weren’t standing there. She grabbed Quinn’s face, bent down, and kissed her cheek. “I missed you. Did you miss me?” she asked, bringing both hands to Quinn’s neck and holding there while standing between her bent knees. Tori was smiling and playing the part, leaning close and making it seem like they were really together, or at least really feeling each other. My sister was blinking up at Tori, looking baffled but also looking like she was wanting to buy everything Legs was selling. I wasn’t surprised. Quinn shared my taste in women. And I definitely had a taste for Legs. “Whoa, are you two…damn. Is this your girl?” one of the shitheads asked from behind Tori, pointing at the back of her. “Jesus,” another one chimed in, looking his fill. “What are the chances of me watchin’ you two go at it? This is fuckin’ hot.” I stepped up then, not liking the tone of this guy and the shit coming out of his mouth, and wanting to make my presence known. He saw me approach and shot me a hard look, asking, “You gotta problem?” “Jamie.” Teeth clenched and fists forming, I looked to Quinn, not taking the bait he was throwing out. She was watching me, eyes serious and mouth tight, subtly shaking her head in warning ’cause she knew I couldn’t be fighting or doing anything that could draw negative attention. Then she turned her attention onto Tori when she twisted and slid into Quinn’s lap. “Fishing in the wrong pond, boys,” Tori informed them, sweeping her gaze over the three while putting her arm around Quinn’s shoulders and pressing close. “Get lost. We’re not interested.” Then she turned all of her attention onto my sister and amped up her game, giggling as she kept her face close to hers and running her fingers through her hair, smiling, whispering, really flirting and looking into it, all while blocking the view of the shitheads so they couldn’t watch. And everything Legs was doing, my sister was eating up. Wrapping her arms around Tori and holding on to her, smiling back, laughing, looking like she was falling in love and thinking this was real and something sustainable. I was starting to regret incorporating Tori into this plan. She was a little too good at her game. Straight up. Maybe the best at it. I was also starting to get mildly jealous watching my sister getting attention from the one woman who was hell-bent on ignoring my ass. “Man, whatever,” the one guy said, grabbing his beer and looking to his friends. “Come on. I’m not wastin’ my time on lesbian pussy.” His friends murmured their agreement, mentioned something about hitting up Roy’s, a bar down the street, then grabbed their beers and stepped away. When they were out of earshot, I shifted my eyes to Legs, telling her, “Think you sold it. You can get off my sister now.” Tori smiled proudly, lifting her shoulders with a little dance. Then she looked to Quinn, keeping the smile, and said, “Hey, I’m Tori. Your brother dragged me here, so I figured I’d offer my assistance instead of letting him handle it, since he can’t fight and all.” “Can fight, just shouldn’t,” I corrected her. I jerked my chin. “Hop off.” Quinn moved her hands up Tori’s back and licked her lips. “Wicked plan,” my sister told her. “I was totally into that.” “I think it got the point across,” Tori replied. “I really like your hair, by the way.” She ran her fingers through it again. “The color looks great on you.” “Really?” “Absolutely. It really makes your eyes pop.” “I was thinking about going purple…” “Have you tried bleaching the roots and just painting the color on the ends? I think that would look amazing with purple.” Jesus. “Legs,” I barked. Both of their heads whipped around and faced my direction. “You feelin’ like gettin’ up so we can get the fuck outta here?” I asked, thinking only about the food back at her place I was wanting to eat and not about how comfortable my sister’s hands looked gripping on to Tori’s body. “She’s fine,” Quinn offered, keeping her hands locked around Legs. “Really. She doesn’t have to move.” I shot a glare at Quinn, communicating how I felt about that suggestion, then shifted that glare to Tori. “I was getting up. Relax. We were just talking,” she huffed, moving off Quinn’s lap and coming to stand beside me. “You’re welcome, by the way,” she murmured.

Jamie, Jamie, Jamie! I mean seriously this guy is just...I don't know what words I could use to convey his sexiness, amazingness, and swoon worthiness. This is the second book in the Dirty Deeds series but they can be read as stand alones. I love these type of series where you love certain characters from one book then you get to watch the friends as they all start relationships.

Tori oh Tori. I loved this character for many reasons. She was feisty, she gave no effs and she was sweet. She isn't one of those protagonists that is whiney and needy, no this girl goes for what she wants. Jamie set his sights on her though and now well now she is all he sees. And let me just say when this guy wants something he makes it very well known!

When Jamie first came into the picture I was like this dude is just a bit too much. Dirty mouth, arrogant and so full of himself but as the story progressed, I began to see a whole other side of him that made me love him and his dirty mouth.

Slow burn books are my jam. I love watching as the characters banter and fall for one another without giving it away. In this book talk about slooooow burn, I mean seriously once you start reading it you will see what I mean. OH! and Quinn, I flipping love her. There is so much to this story that I feel needs to be experienced. The author did a great job in providing a setting that is mellow and relaxed. The main characters brought forth their witty snide remarks and push and pull, while the secondary characters rounded out the storyline perfectly. It was a fun read. I definitely recommend this book to anyone looking for a love/hate relationship as well as witty banter and a guy that can leave women satisfied.

J.Daniels is the New York Times and USA Today bestselling author of the Sweet Addiction series, the Alabama Summer series, and the Dirty Deeds series. She would rather bake than cook, she listens to music entirely too loud, and loves writing stories her children will never read. Her husband and children are her greatest loves, with cupcakes coming in at a close second. J grew up in Baltimore and resides in Maryland with her family. Sign up to receive her newsletter and get special offers and exclusive release info: http://authorjdaniels.com/newsletter/ Twitter | Instagram | Website | Facebook | Amazon Author Page |Goodreads | Reader’s Group
Posted by Unknown at 6:00 AM