Happy Release Day to Jessica Sorensen and her new YA book, The Year I Became Isabella Anders! Make sure to enter the giveaway for a signed paperback of this book! #NewSeries #TopFave
♥ BUY THE BOOK ♥
Amazon

Cold rain instantly soaks through my clothes as I skip down the driveway, moving awkwardly, because I can’t bend one knee. I don’t care though. Rain is awesome. And it smells so great. Seriously, if I could, I’d skip around in the rain all the time. My hair is drenched by the time I reach the sidewalk, and the flip-flops splash water from the puddles all over the backs of my legs. It reminds me of this one time Kai and I walked home in the rain and we intentionally splashed in all the puddles. “Isa! What are you doing?!” Someone shouts with a hint of laughter in their voice. My head whips to the side as I stumble to a stop. Kai is standing out on the side deck, beneath the shelter of the roof, and I think he might be laughing at me, but the veil of rain crashing from the cloudy sky makes it difficult to see. “Going to the paint store!” I shout then wave at him and start to skip off again. “Are you crazy?” he calls out. “You can’t walk to town in the middle of a rainstorm.” I sigh and slow down again. “I’m not walking! I’m skipping!” My eyelashes flutter against the rain. “Can’t you wait until it at least stops raining?” he asks, shaking his head as I jump into a puddle. “No way! It’s either the rain or being in the house with Hannah. And I choose the rain. Besides, rain is awesome!” I can hear him laughing all the way from over here. “Would you get your ass over here?” He waves at me to come to him. “I’ll drive you if you really want to go. But it’s too damn cold for you to be playing around in the rain, no matter how cute you look.” Cute? Did he just call me cute? 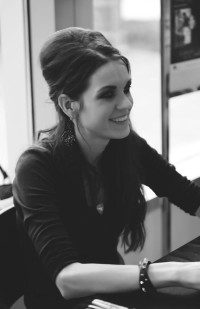 Jessica Sorensen's THE YEAR I BECAME ISABELLA ANDERS Release Day Giveaway
Posted by Unknown at 6:00 AM