Full Exposure is the finale of a three-part erotic series from New York Times and USA best-selling author Cathryn Fox. I’ve just had the best two weeks of my life! Who’d have guessed that a big part of my rehab would involve giving a gorgeous psychologist private lessons in sex? The problem? I’m hooked. I want more and that wasn’t part of the deal. But I have a job to go back to, and she’s already pushing me away. So what the hell am I going to do? Still, as a quarterback, I know some things need a playbook and I’m used to winning. So before I walk away from this incredible thing between us, I’m going to use every strategy I know to convince her that the only hands she needs are mine… This is the last of a three-part series full of mind-blowing sex, featuring a dirty-mouthed football player who knows the score and an inexperienced therapist who needs to learn it. Make sure you have the full series! The Hands On serial is best enjoyed in order.
Reading Order: Book #1 Hands On Book #2 Body Contact Book #3 Full Exposure

“Christ, I feel like a teen again,” he whispered, peeking through the house, ensuring they were really alone.
She lowered her voice to match his. “You used to sneak girls to your room? I thought you said you’d never brought a girl home.”
“I didn’t.” His grin turned wicked. “I used to sneak into their rooms.”
“You are a very bad boy, Jack.”
“Why don’t you come upstairs and I’ll show you how bad.”
“A real sweet talker, too,” she murmured.
“If you’re nice, I’ll let you use that line in one of your lectures.”
She laughed, then put her hand over her mouth to stifle it. “Wait, why are we whispering?”
A rich, decadent rumble of pleasure sounded from the depths of his throat as he closed his hands over her wrists and backed her up. “I have no idea.” She hit the wall, and his gaze fell to her mouth, his smile fading. “God, that mouth,” he murmured. “The whole time we were at the house, all I wanted to do was kiss the hell out of you.” He pinned her arms above her head, holding them there with one hand while his other went to her mouth. He brushed her bottom lip with his thumb, then eased her lips open to push his finger inside.
She widened to accommodate his thickness, and using her tongue, she ran it around the tip of his thumb. He groaned, a deep, tortured sound that reverberated through her blood. She closed her mouth around him and sucked him in deeper.
“Fuck me,” he said, and pressed his cock against her, letting her know exactly what she was doing to him.
“I believe that’s the plan,” she murmured when he withdrew his wet finger.

What I love about serials are they are quick and to the point. This is the 3rd and final in the Hands on serial and it was perfect. Jack and Danielle go through a series of events, one being that she is a virgin and was hired to teach a sex ed class. She enlists the help of her former High School crush, now NFL player Jack, who has hurt himself and is back in town. She propositions him into giving her sex lessons along with taking her virginity.

Each serial leads to that epic moment and Jack is such a gentleman. He cares about Danielle and doesn't want this to be a horrible first experience for her. The first book had moments of hilarity which carry over into the 3rd. Danielle was very by the book and would often read about sexual things, making me laugh because she got things down quite fast (PUN TOTES INTENDED).

Overall I enjoyed this series. I love serials because as stated above quick and to the point. I don't like to give to much away especially because this is the 3rd one in the series. I loved how these wrapped up and the author did a great job making me want to continue living in this world. 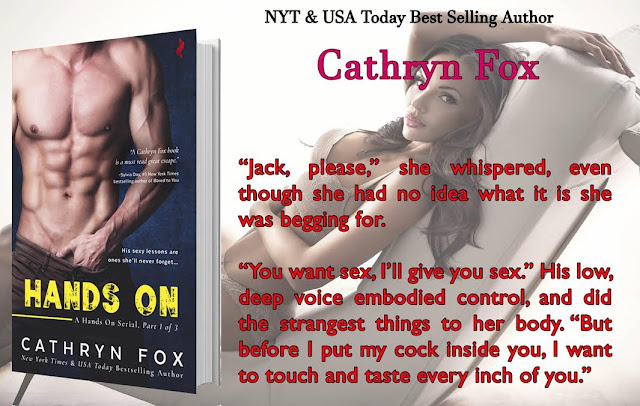 Amazon: http://amzn.to/29RDZ35
Amazon CA: http://amzn.to/2a0bd2t
Amazon UK: http://amzn.to/2a2ec7e
B&N: http://bit.ly/29Z943Y
Kobo: http://bit.ly/29RE8mT
iBooks: http://apple.co/29DCxCm
Synopsis: Hands On is the first of a three-part erotic series from New York Times and USA best-selling author Cathryn Fox. When hot as hell Danielle Lang showed up and asked me to teach her about sex, I thought I was hallucinating. Turns out the beautiful psychologist needed an extra bit of schooling in all things sexual so she could teach a class. I’m always up for helping a friend. I mean, it’s the least I can do. What I wasn’t expecting is for her to turn the tables and teach me a few things. Only this short-term promise of two weeks in her bed is going by a little too quickly. Not that I’m thinking forever or anything. I’ve got a football career to get back to. And she doesn’t want to be a part of my world. There’s no way we can be together—so I’m going to make sure I enjoy every sexy second…. This is the first of a three-part series full of mind-blowing sex, featuring a dirty-mouthed football player who knows the score and an inexperienced therapist who needs to learn it. HANDS ON is sure to leave readers begging for more. The next installment, Body Contact, will be published August 2016.

Amazon: http://amzn.to/2bG7LGV
Amazon CA: http://amzn.to/2bG7NhO
Amazon UK: http://amzn.to/2bUIGw9
B&N: http://bit.ly/2bsvjyZ
Kobo: http://bit.ly/2aNLae5
iBooks: http://apple.co/2bsvSKn
Synopsis: Body Contact is the second of a three-part erotic series from New York Times and USA best-selling author Cathryn Fox.Asking pro football player Jack Rider to teach me everything he knows about sex might have seemed like a good idea at the time, but now I’m not so sure I can handle a guy like him. I thought he’d just straight up do me, ridding me of my pesky virginity sooner rather than later. But no, he had his own ideas about bringing me up to speed on sex. His two weeks of slow seduction might just be the death of me, but since he’s the one in charge, I have to play the game his way. Not that I’m not enjoying it. I am. Who wouldn’t, right? I guess I just can’t help but wonder how I’ll ever let another man touch me after him. This is the second of a three-part series full of mind-blowing sex, featuring a dirty-mouthed football player who knows the score and an inexperienced therapist who needs to learn it. BODY CONTACT is sure to leave readers begging for more. The next installment comes September 2016.

New York Times and USA Today bestselling author Cathryn Fox is a wife, mom, sister, daughter, and friend. She loves dogs, sunny weather, anything chocolate (she never says no to a brownie) pizza and red wine. Cathryn has two teenagers who keep her busy and a husband who is convinced he can turn her into a mixed martial arts fan. When not writing, Cathryn can be found laughing over lunch with friends, hanging out with her kids, or watching a big action flick with her husband.